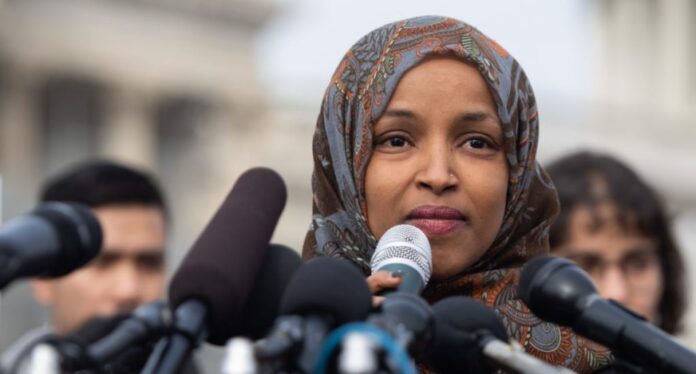 The definition of murder is pretty easy to understand. It is defined as killing someone unlawfully and with premeditation. To be clear, premeditation means to plan the crime beforehand.

No cop plans to murder anyone because that’s just not the way the job works.

Ilhan Omar, a Representative out of Minnesota, should understand what murder means. However, she seems to be confused…again.

A black man by the name of Dolal Idd was fatally shot by Minneapolis police last Wednesday. Omar calls it a “state-sanctioned murder.”

Whoa, that’s a pretty hefty accusation that she’s making there.

Omar wants to set up a double standard by demanding that we stop normalizing “state-sanctioned murder” by those who take oaths to “uphold the law.”

MPD is a joke, this isn’t transparency or accountability.

A man was killed, his family terrorized & robbed of a son and all they are left w/ is more questions than answers.

Let’s stop normalizing + justifying state sanctioned murder by those who take an oath to uphold the law. https://t.co/PPYcYvCa6i

Whatever happened to demanding that citizens follow the law? As soon as a citizen stops following the law, the police have to do what they can in order to get the situation under control.

Dolal Idd fired first. He used a gun and fired at the police.

The police responded by shooting. They had no choice. That choice was taken away from them the moment that Idd fired his gun. What would Omar have them do? Stand there and get shot at by a criminal simply because he was black? What would that actually accomplish?

Omar finds it completely reasonable to allow multiple police officers to be shot and killed so that a criminal can get away. Why? Because that criminal is black. By her demanding such an action, she’s showing that she’s just as racist as she claims the police officers are. She believes that one life is more important than the lives of many just by the color of his skin.

Bodycam footage shows that the police only fired once Idd chose to fire on the officers.

Omar doesn’t have the whole story. And if she does, she doesn’t care. She’d rather sit in her office and tweet things like, “A man was killed, his family terrorized & robbed of a son.”

Wait, what? The man was killed because he tried to kill the police officers that were coming to arrest him. His family wasn’t terrorized. And the only reason that the family was robbed of a son is that the son thought it would be a good idea to fire at armed officers.

This is a clear case of the police doing what they had to do in order to defend themselves. Medaria Arradondo, the Minneapolis Police Chief, a black officer, confirms that the officers only shot after Idd shot. Not only does the body cam footage confirm this but so do nearby witnesses.

Why did Idd get shot in the first place? The police were looking to stop him because of being a suspect in a felony gun investigation. They weren’t out to kill him. They wanted to talk to him. They wanted to bring him in for questioning. Idd didn’t bother to find out, though. He began shooting at the officers from within his car – so the police shot back.

Of course, the family wants answers. Idd’s father is accusing the officers of killing his son for “no reason.” Well, your son shouldn’t have been shooting at the cops, so there’s that.

This has to stop being about color – and Ilhan Omar is simply instigating the entire issue. Don’t break the law and don’t fire at the cops. If you follow the law and you don’t shoot at the cops, they won’t shoot back. It’s really as simple as that.

And guess what? The same thing would have happened if Idd was a white man. You shoot the cops, you’re going to get shot, too.