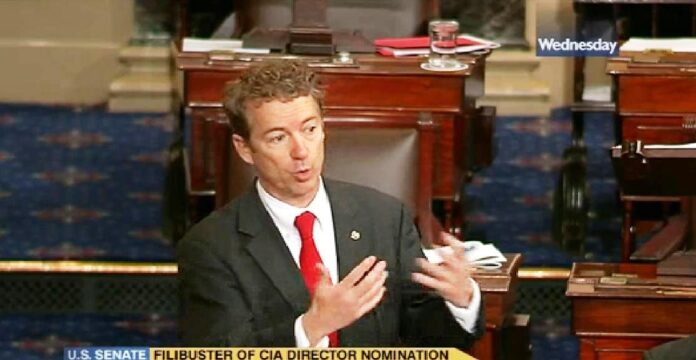 Joe Biden had once flaunted the idea of making everyone with a COVID shot carry a COVID passport. They would display their badge of honor around and not have to wear a mask in public any longer. But his idea started falling short with a lot of conservatives because it violated one primary fundamental issue. And that is personal freedom. He does not have the Constitutional right to force anyone to reveal personal information.

The idea is still alive in the back of his mind. And when he gets the chance, he tries to bring it back up. Every idea is found in the CDC guidelines taped to every doctor’s office throughout the country. There are signs posted on the walls that declare that they can remove their mask if a person is fully vaccinated. But no one has the right to question non-mask wearers about their health information.

Senator Rand Paul is very quick to challenge the socialist-based idea with fact. And each time, he puts another hole in the side of the passport ship. And this latest time, it looks the ship is sinking to the bottom of the ocean.

Paul brought up a study that the Cleveland Clinic did. Their people studied over 52,000 employees and found that those who have had the vaccine and those that have had COVID have found that each group is exactly like the other. Natural immunity is exceptionally effective and is just as good, if not better than a vaccination shot.

Joe Biden must have forgotten about natural immunity. He pushes the shot like a person’s body cannot beat the virus on its own. He pushes the shot on everyone because he wants to take the glory for inoculating an entire country. He wants to stand before the world and claim that he has done what no one else could ever have done.

This study only proves what every person already knows about viral infections. Once the body contracts a virus, it releases antibodies into the bloodstream. The body’s natural immunity response kicks into high gear and eliminates the threat. And if that viral strain ever shows up again, the body will beat it again.

The general public is not as dumb as Biden thinks it is. The people that are refusing to get the shot are not traitors. They are people that have already beaten the virus on their own and do not want to take a shot that can be used for another person that still is vulnerable.

For Biden to try and make everyone carry a COVID passport is another way he seeks to divide the country. An estimated 50 million people or more do not need to have the vaccine because they are immune. When that number is added to the vaccinated number, most of the country is immune to COVID-19 and many variants.

Joe Biden cannot bring himself to admit that he is wrong. He needs to force the passport idea on people so he can feel powerful. He has a hunger to rule people either by force or by law. But he will never give in to the idea that his logic is flawed.

Science proves that there is no need to force an injection on a person that is immune. The passport idea is a liberal way of controlling people. The media is already trying to phase out of existence adverse testing reports. They want to push a passport on people before they can travel around.

The Democrats continue to play their political games with dead issues such as COVID-19 and conservative terrorists. They need conflict to keep the American people out of touch with the nonsense they want to push through and establish as law in America.

Rand Paul keeps attacking the demented whims of Joe Biden. He keeps bringing up the obvious to show just how far-gone Biden is with reality. He no longer follows science. He would instead invent his facts to support his tyrannical whims. Biden cannot bring himself to admit that Donald Trump was right when he mentioned the virus is on its way out nearly one year ago.