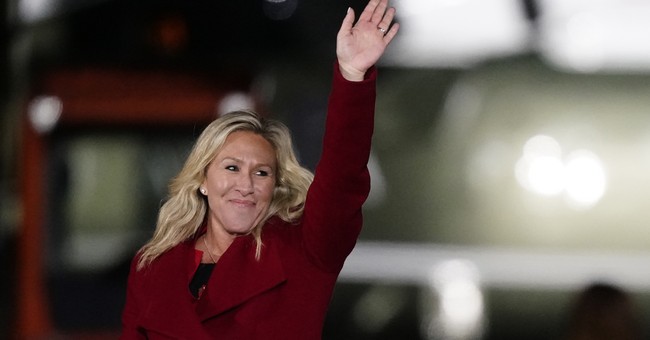 While the consternation over Rep. Marjorie Taylor Greene’s regrettable Holocaust comparison, spoken some weeks ago, has largely died down, she made a surprising announcement today in relation to the controversy.

After visiting the Holocaust Museum in Washington D.C. to learn more about the subject, the congresswoman walked to a podium and delivered an unequivocal apology for her remarks.

Now, regardless of whether you like Greene or not as a politician — and there are certainly better options out there to represent the future of the GOP — the fact that she was willing to do this shows at least some ability to self-reflect and not continually double, triple, or quadruple down on every mistake that is made. While people love it when politicians “fight,” you can actually prolong a controversy by not simply saying “I was wrong” and moving on. Besides, everyone screws up from time to time. When a politician pretends they are infallible, it all just starts to just feel weird.

Greene apparently had this trip set up for the last few weeks and today was the culmination of that. While it won’t change anything about how the media treats her, what she did here actually managed to kneecap the Democrats in the process.

Recall that we are in the middle of another bout of anti-Semitism and anti-Americanism from Rep. Ilhan Omar. In comments to Secretary of State Antony Blinken, Omar compared Israel and America to Hamas and the Taliban. She, of course, doubled down when challenged, only offering a “sorry you misunderstood me” clarification later. Nancy Pelosi would then come out and essentially say that Omar did nothing wrong.

Compare that to Greene, who was willing to go learn something new and adjust her viewpoint based on it. Omar has never attempted to do that. Rather, she’s presented herself as a bastion of knowledge on world events despite her obvious ignorance. Democrats want to be able to claim the moral high ground, but after this, they can’t do so with any credibility. Greene and her party showed they have lines. Democrats continue to show they have absolutely none, up to and including defending a rabid anti-Semite like Omar.

I know some may be disappointed with Greene here, always wanting to see war waged, but I think she did the right thing. Sometimes “fighting” means not handing your enemy ammunition to keep shooting you with. She recognized that and undercut the Democrat and left-wing media narrative about her. Honestly, good for her.