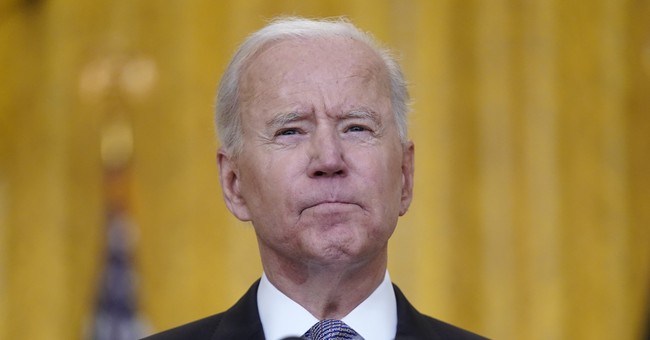 It’s been a complete embarrassing mess for Biden.

It started with his wife providing some bad optics, sitting at the presidential desk on Air Force One, tweeting that she was “prepping for the G7” and then once they got to England, scolding Joe to “pay attention.” It continued into Sunday, with Biden getting confused and Boris Johnson actually shushing him twice, with the other leaders laughing. Then Biden really screwed up the press conference, losing his cool and saying weird things, as well as saying his team didn’t want him answering questions. On top of all that, he confused Syria with Libya three separate times without seeming to realize it and even while trying desperately to straighten himself out by looking at his note cards.

But now Biden just got played by Vladimir Putin, before they even met yet.

Putin proposed the concept of giving up cybercriminals to the U.S. if the U.S. would agree to do the same.

“If we agree on the extradition of criminals, then Russia will naturally do that but only if the other side, in this case, the United States, agrees to the same and will also extradite corresponding criminals to the Russian Federation,” Putin said according to Russian news agency TASS.

“In an overwhelming majority of cases, they are equitable. Both sides assume equal commitments,” he continued.

Now there are two traps in this proposal: one, that it’s Russian criminals behind these cybercrimes, not us. We’ve been attacked by multiple ransomware attacks, hitting everything from the Colonial Pipeline to our meat supply. Nothing happens on this scale without acquiescence from Putin. That’s what Biden should be saying and pressing Putin on, we should be saying we have your number and will hold you responsible. Agreeing to this proposal makes it seem like this is some kind of equitable situation when they’re the ones harboring and/or utilizing the criminals. It immediately downplays who the actual bad actors are here. On top of that, agreeing to turn over people that Russia wants is a very bad precedent to start, because Russia makes up crimes against its political enemies. If Biden did that, he would be agreeing to turn over Americans to the Russians. You don’t want to go down that road, an incredibly bad idea.

But Biden, who already revealed how out of it he was, fell right for it, saying sure, he was open and indicating he thought this was a “good sign.”

“Yes, I’m open to, if there’s crimes committed against Russia that, in fact, people committing those crimes are being harbored in the United States, I’m committed to holding them accountable. I was told as I was flying here that he said that. I think that’s potentially a good sign of progress,” Biden said at a post-G-7 summit press conference in the United Kingdom on Sunday.

Even this CNN reporter and Buzzfeed reporter got how problematic this was, on multiple levels. But not so much Joe when he spoke.

After Biden’s comments caused a lot of raised eyebrows, National Security Adviser Jake Sullivan had to backtrack and clean it up, saying Biden really hadn’t said what he said.

Biden is “not saying he’s going to be exchanging cybercriminals with Russia,” White House national security adviser Jake Sullivan said, speaking to reporters aboard Air Force One on Sunday, instead arguing criminals were already held to account in the United States.

It’s surely a tough job to handle Biden. It must be a constant clean-up effort.

I saw a picture today that really says it all, that sums up what it must be like.