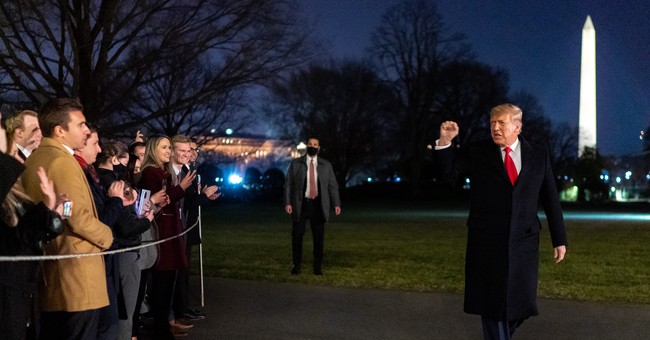 “Have you noticed that they are now admitting I was right about everything they lied about before the election?” President Trump asked, in reference to the media, via an email to his supporters.

He went on to list 10 stories from 2020 alone that the former commander-in-chief has been vindicated on, calling into question just what the heck media was focusing on all of last year.

Here’s a little background comparing what was being said at the time, and what is being reported now:

The media first claimed Hydroxychloroquine plus zinc would not help patients with COVID-19. Indeed, in November 2020, NBC News ran a headline stating, “The ‘evidence is clear’: Hydroxychloroquine doesn’t help Covid-19 patients.” But now, new studies show the medicine traditionally used for anti-malarial purposes does indeed serve some lifesaving benefit for those with critical stages of COVID-19. Compare that November 2020 NBC News headline to this one, from the Washington Examiner in June 2021. “Study shows hydroxychloroquine and zinc treatments increased coronavirus survival rate by almost three times.

Next, the media profusely condemned the Wuhan Lab Theory leak regarding the origins of the Coronavirus as “racist,” but new evidence has emerged proving this theory is likely true. Even the Washington Post admits the media botched this major story. “The media called the ‘lab leak’ story a ‘conspiracy theory.’ Now it’s prompted corrections — and serious new reporting,” the paper recently declared.

Third on Trump’s list is the Hunter Biden laptop scandal. Last fall, Big Tech and the mainstream media dismissed reports that the son of now-president Joe Biden allegedly haphazardly forgot his laptop containing potentially incriminating, and certainly embarrassing, evidence at a computer store in Delaware. This was a major story, implicating Joe Biden and possible Biden family corruption. Those who shared it were censored. But, alas, this story, too, is true. You would think the media would be scrambling to investigate illicit activity between Hunter Biden, his father, and overseas business partners — but that seems unlikely.

Just this week, the Department of Interior inspector general reported that President Trump did not order BLM protesters to be removed for a photo-op from Lafayette Square last summer for a photo-op. On NBC.com, Jim Antle asks, “Trump photo op at church wasn’t why Lafayette Square was cleared. Where are the mea culpas? Democrats can’t be for truth only when they’re calling out Trump’s lies. Not admitting error amid new evidence debases the truth they claim to revere.”

Indeed, Antle concludes, and perhaps Trump’s list of bogus stories confirms, that “[i]f liberals disapprove of the misinformation bubble that has allowed falsehoods about the 2020 presidential election to fester, they must recognize the role stories like this have played in creating the market for it — and avoid creating a misinformation bubble of their own.”

Remember the reports that the United States ignored reports that Russia had placed bounties on American soldiers in Afghanistan? This is also completely false, with no evidence backing the claim.

Likewise, “experts” claimed that President Trump would need a “miracle” to produce Covid vaccines by the end of 2020. Again, as we all remember, vaccines were not only ready at the end of the year, but they were also already being distributed.

Republican Florida Gov. Ron DeSantis was vilified by the media for opening his state. His argument was that safety, and the economy must be balanced. Democratic governors like New York’s Andrew Cuomo, California’s Gavin Newsom, and Michigan’s Gretchen Whitmer locked-own their economies and kept people indoors. Now, thousands of deaths later, it seems that DeSantis had the proper approach. His state is doing phenomenally-well economically and does not have a higher death rate than his counterparts in the aforementioned states. Of course, RedState has written extensively on this topic from the get-go, defending DeSantis and exposing the fallacies of Democratic governors on the topic.

Don’t take my word for it, take CNN’s:

Despite far fewer rules and restrictions, Florida lands nearly in the middle of all states on a variety of coronavirus metrics. The state has had about 3% more Covid-19 cases per capita than the US overall, but about 8% fewer deaths per capita. More than 32,000 Floridians have died of Covid-19, and the state’s per capita death rate ranks 24th in the nation.

Next, thanks to intrepid reporting by journalist Chris Rufo, the nation is abuzz with parents in local school board meetings across the country fighting back against Critical Race Theory — an educational philosophy which not only teaches, but puts into practice discrimination against White students, and truly any student who believes that we should not judge each other by the color of our skin, but the content of your character. Leftists, of course, wrongly assert that CT is tantamount to simple diversity trainings and other “inclusion methods.” In 2020, Trump signed an executive order barring CRT from the federal government after Rufo reported anti-white male trainings taking place in a variety of federal institutions. Trump was maligned as racist by the mainstream press. Again, RedState has touched upon this topic, too, but the legacy media is only now starting to dive more deeply into what it means.

Lastly, President Trump received almost zero credit for his Southern Border policies. Now that President Biden is repealing nearly every Trump-era policy, the border immigration surge has returned. Mainstream media outlets are now admitting the border is the worst it has been in years.

Keep in mind, these 10 stories were from 2020 alone. Imagine the amount of ink needed, if we were to create a list of media lies for all of Trump’s presidency?

One can’t help but wonder how the election would have turned out in 2020 if we had a mainstream media who actually reported the truth, and didn’t simply run with the first thing that could harm President Trump’s approval. We doubt that an honest legacy media will appear anytime soon, so in the meantime keep on reading RedState.com for the latest news delivered with accuracy.