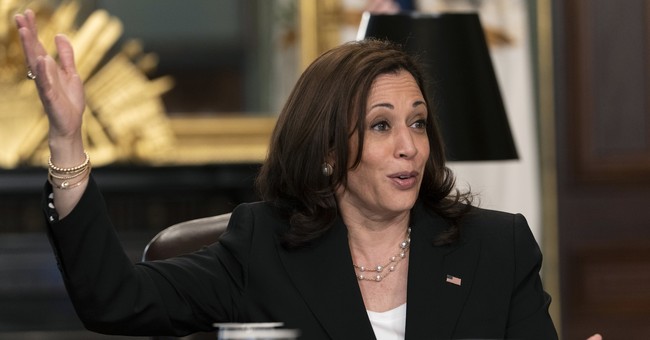 Kamala Harris is back from her trip to search out the “root causes” of the border crisis in Guatemala and Mexico.

But instead of playing this search for Waldo, she should have looked in the mirror. Even the Guatemalan president told her that the “cause” was essentially the Biden/Harris policies. He even gave a further interview on what he thought they needed to address. So, unless they’re willing to change those policies, the massive influx, which has grown with each month since they came in, will continue.

But, here’s a little highlight reel of how that went — when she was pressed repeatedly on when she would be going to the border to assess the crisis. It did not go well.

But, while she still hasn’t made it to the border, she did manage to make it to the Pride event in Washington, D.C., Saturday with her husband, Doug Emhoff. Both wore “Love” shirts, and she wore a pink blazer.

She seemed to give her Secret Service folks a coronary by running into the crowd, and her cackle was in evidence as she yelled, “Happy Pride!”

You can see the tall, Terminator-looking Secret Service guy in the bowling shirt and the sunglasses just freaking as she does that, looking in all directions. Poor guy. You can pick out the Secret Service people by the sunglasses. It looked like she had at least seven of them scrambling to cover her as she did this. Really not a safe thing to do, because there’s no real way to completely secure that situation — when someone plunges into a crowd.

She’s such a phony; she really wants to be embraced, but she’s not authentic and people get that. You can see her pitching here, trying far too hard. She’s coming close to grabbing the crown for most unlikeable from Hillary Clinton, although, admittedly. Hillary has a big leg-up and history on her.

We need to make sure that our transgender community and our youth are all protected. We need, still, protections around employment and housing,” Harris said, according to NBC Washington. “There is so much more work to do, and I know we are committed.”

She apparently thought she’d be embraced here. But even there, she couldn’t escape “the question” about the border, as Sean Spicer reported.

But, Kamala’s avoided giving a real answer so far, so she wasn’t about to answer it now. And she still didn’t give an answer here.

But, people aren’t going to stop asking and she’s just stoking it up as an issue by giving silly answers and not actually doing anything about it.