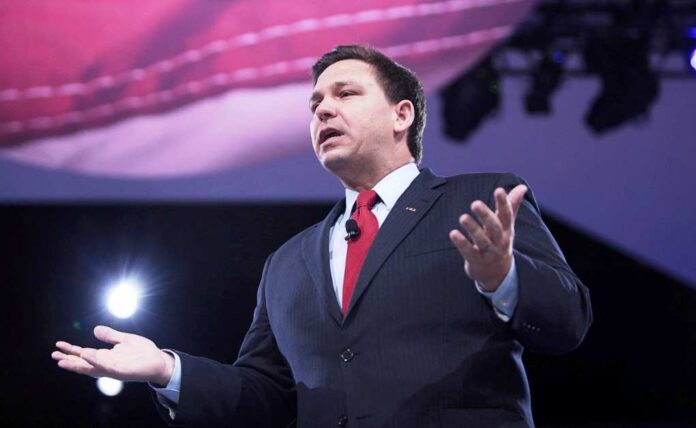 Millions of people in America want to see a president that will not give in to pressure. They want to see a person that will fight for what is right, and that will make America great again. They voted for Donald Trump in record numbers. But the liberals had to photocopy their ballots and wreck the entire system.

The conservative side of the country is drooling at the chance to pick their next candidate to sit in the White House. They are sick and tired of Joe Biden trying to act like a president when he cannot even remember what he is to say at a speech.

The man that they choose will be a person that will tell Big Tech what they can and cannot get away with. And they will put Americans first instead of listening to terrorists and their threatening demands.

Ron DeSantis is one of those figures that is quickly rising to the top of the charts. He has taken the bull by the horns and laid it flat. He is setting himself up to be one of the major contenders in the 2024 election.

Florida is one of the first states to stand up to the national regulations that Biden tried to pass off to each state. He stopped the idea of COVID passports dead in its tracks. He has opened up schools and put the state’s economy back on track by letting people get back to work early on during pandemic days.

He has told Big Tech that they cannot get away with censoring people in Florida. And he certainly has not backed down to one story after another that was written for the sole purpose of smearing his good name. The Democrats do not have the guts to stand up to the man because they know that he will put them in their place and do what is suitable for the people.

DeSantis has shown the world the right way to run a state. He does not put up with extensive sports programs threatening to leave if men cannot abuse girls in sports. And he certainly is not going to let Biden take Floridians backward in pandemic-style lockdowns just because he wants the credit for reopening the country.

There are even some Democrats that do not want to see him go because he is making a difference. And he is doing it the right way. When the media tried to tell a fake story about how DeSantis favored campaign contributors over others, some Democrats came to his defense. The media was not going to get away with the treacherous lies.

The Floridian governor has rightly noted that conservatives are targeted as a terrorist. They are being attacked at every turn by liberals determined to restructure everything they can before the public can find out what they are really up to.

DeSantis noted that “If all you’re doing is, the Democrats propose $2 trillion in infrastructure, so we say we’ll do $1.5 trillion, that’s not going to animate anybody. That’s just ‘me, too’ Republicanism and ultimately that’s not going to be successful.”

DeSantis is a man that leads by example. If he is going to tell people how to stand up to liberals, he will put those words into practice. He stated that “I’m totally willing to sacrifice an event in order to stand with the girls of my state. It’s an easy decision, and I don’t view it as pressure as much as saying, ‘The battle lines are clearly drawn, so which side are you going to be on?’”

The people come first to Ron DeSantis. And that is what is making him dangerous to the Democrats that want to put themselves first. He wants to empower people to stand up and do what is right.

He stated that the Republicans need to “Stop trying to grovel in front of them [the media], stop thinking that they’re going to like you, stop trying to impress them. Fight back against them. That’s really what you have to do.” It is time for people to stand up and take their country back from the Democratic invaders.