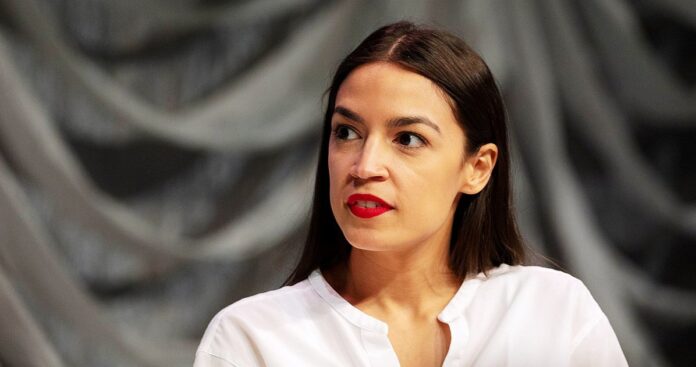 Every now and then, someone says something so stupid that it causes your eye to twitch. That’s usually what happens when Alexandria Ocasio-Cortez speaks.

She has a new plan to reduce the number of people going to jail.

This would sound like good news, right? There’s going to be some kind of criminal reform program that teaches people how to be upstanding citizens.

“If we want to reduce the number of people in our jails, the answer is to stop building more of them.”

Ouch. This actually hurts to hear it out loud.

What exactly is AOC trying to say, here? Well, she believes that jails are being used as “garbage bins for human beings.” She believes that criminals need to be supported as opposed to being thrown away.

Apparently, she’s not aware that jail is a deterrent. Most people will choose not to commit crimes so that they aren’t thrown into jail. Further, jail is used as a temporary facility. Most people are taught skills within jail so that they can come out and become upstanding, model citizens.

AOC feels that there is a correlation between homelessness, incidents of violent crime, and the mental health system. While she may be right, it still doesn’t change the fact that jails are needed in order to place those who cannot follow the law inside of them. Simply failing to build jails isn’t going to stop crime.

What happens if there aren’t enough jail cells for those committing murder, sexual assault, and more? Do we simply allow them to continue roaming the streets? If it were up to AOC, yes. Why? It would allow them to “learn their lesson” and get the help that they needed.

What if not all people committing violent crimes are mentally ill? The reality is that there are people who are simply capable of committing crimes without feeling anything. They may never get the help that they need.

Yet again, the Democratic Representative has a half-assed plan. She wants to make a bold statement that leaves the rest of the country scratching their head. It’s great that she doesn’t want criminals to feel like garbage. No one should be treated like garbage. However, she needs to take a good look at what the prison systems really have to offer.

The reason that a person is in prison is that they have been found guilty of committing a crime. It means that there was enough evidence to hold that person responsible for a specific crime.

While in prison, they are given access to bedding and three meals a day. They have access to physical fitness activities and will be able to socialize with other inmates. Many prisons allow prisoners to work. Many also offer ways to get educated.

The goal is reform. Once a person exits prison, the goal is that they are reformed into a model citizen. They are not treated like garbage.

AOC is taking the wrong approach. She wants society to stop treating criminals like they aren’t human. Perhaps it’s time to ask the criminals to start acting more human. Perhaps she needs to work with Kamala Harris on the root problem as to why so many people, especially in New York, are committing crimes.

There has to be some kind of deterrent. If you break the law, there will be a penalty. AOC isn’t big on deterrents, though. She wants to be naive enough to believe that if there aren’t enough prisons, there won’t be as many arrests.

Crime needs to be reduced, but it’s not going to be by anything AOC suggests. She’ll only make crime rates higher.