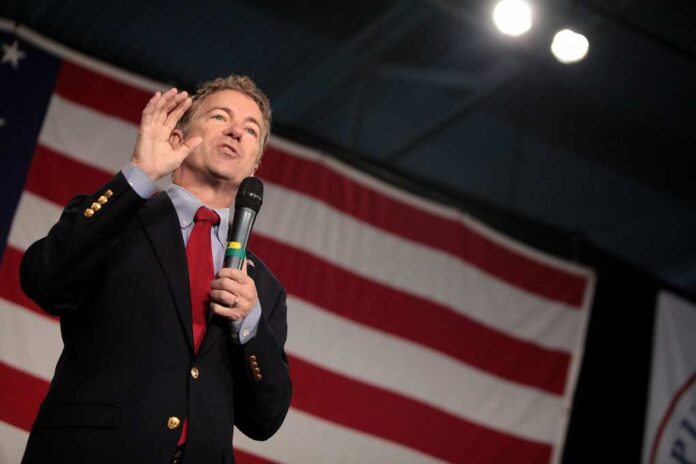 Last week saw many Americans shocked that White House adviser Dr. Anthony Fauci could have been so duplicitous to the American people while in a position of power. His public-facing comments about the COVID-19 virus appear to completely contradict

Some of the most disturbed seemed to be the groups pushing his books, including Amazon and Barnes & Noble who have removed all signs of Fauch’s new book, “Expect the Unexpected: Ten Lessons on Truth, Service, and the Way Forward,”

That fact was not lost on Kentucky Sen. Rand Paul who has been embroiled in more than one controversy surrounding the now-disgraced leader of health.

“Oh, I don’t know. I think they should publish it. I love science fiction,” Paul said on Wednesday the same day book was removed from both Amazon and Barnes & Noble’s websites amid claims that he was profiting from the pandemic, according to The Daily Wire.

Fauci was accused of profiting off the pandemic after his emails were released under a FOIA request, which caused a chain reaction that has spiraled into what some vindicated conservatives consider the NIH director’s just deserts.

Paul, however, wasn’t pulling any punches, just because Fauci’s chips are down. The Kentucky Republica tweeted just two words when the news broke: “Told you.”

He had somewhat more to say on Wednesday when he spoke to Fox News’ Laur Ingraham when he pointed out that if it turns out this virus came from the Wuhan lab,” that there’s “a great deal of culpability in that he was a big supporter of the funding.” “[H]e also was a big supporter to this day of saying we can trust the Chinese on this, we can trust the Chinese scientists,” said Paul. “And I think that’s quite naïve, and really should preclude him from the position that he’s in.”

When asked by the Fox host about possible “criminal culpability,” for Fauci, Paul said, “At the very least, there’s moral culpability.”

The Republican’s outrage is not unwarranted, however. Fauci was incredibly quick to push reporters and other interested parties off the scent of the Wuhan virology lab as a possible source of origin for the COVID-19 virus that has caused so much destruction. Questions about the ethical nature of listening to the leader of an organization with such strong monetary ties to the lab were quickly dismissed, with frustrated regalements of Fauci’s illustrious history in “public service.”

However, those emails proving what conservatives, like Paul, have been saying from the start, is the kind of confirmation to make Americans question all sorts of leaps they were previously unwilling to make.

“Senator Paul, with all due respect, you are entirely, entirely and completely incorrect,” Fauci replied. “The NIH has not ever and does not now fund gain-of-function research in the Wuhan Institute of Virology.”

Recent research, backed up by information related to Fauci’s emails that are now public, have proven that to be a bald-faced lie.

Paul, and other conservatives, questioned Fauci and were told that their concerns were insulting. So insulting in fact, that there were “no conditions” under which the White House would terminate its working relationship with Fauci. Paul’s point is a good one, and it leads us to the question, has there ever been any statement more incriminating than the blind declaration of loyalty made by the Biden administration to Fauci? No matter what comes out about him, no matter his actions, he seemingly still has a happy home with President Joe Biden, and that should concern us all.