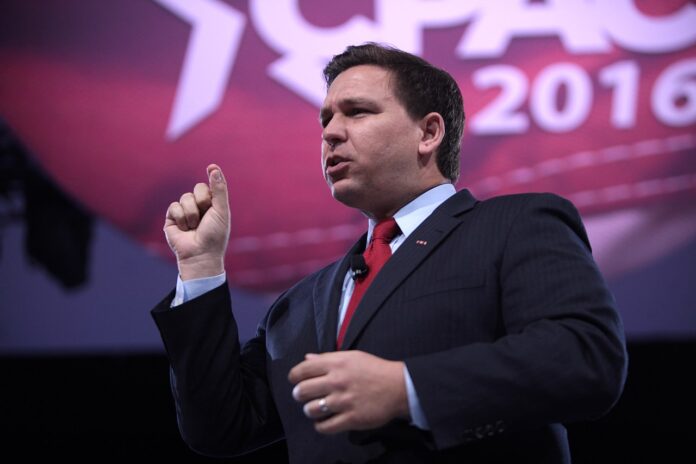 Florida Gov. Ron DeSantis isn’t pulling any punches when it comes to protecting the sports for Florida girls, as was evidenced by his recent move to ban natural-born males from competing against those born females.

DeSantis told the NCAA what they could do with their forceful opinions on transgender integration in his state’s high schools in a recent interview on Fox News.

Desantis was interviewed about his common sense and yet somehow still groundbreaking decision to ban those born males from female sports, where he slammed the NCAA for trying to force his hand and make him stop protecting girls sports:

“I think as these bills were going through various legislatures, I remember the NCAA put out a statement saying any state that enacts this, we’re not going to hold events there,” DeSantis said according to The Daily Wire. “And so I called the Speaker of the House in Florida and I said, ‘did you hear what they said?’ And he’s like, ‘yeah,’ I said, we definitely got to get this done.”

It was Tuesday when DeSantis signed the so-called “Fairness in Women’s Sports Act” into law, which prohibited even those males who identify as transgender females from competing on female sports teams in both high school and college.

According to DeSantis, the state of Florida believes in “protecting and fairness and the integrity of women’s athletics.”

The governor hasn’t made any bones about his political and personal leanings, making his statements from the front of a private Christian school saying that in his state they can be sure that girls are going to play against other girls and boys are going to play against other boys in sports and that this bill is an effort to make sure girls get a fair shake at athletic glory.

This move caused the NCAA to threaten to pull its championship games out of the state, claiming that the governor was “discriminating” against transgender athletes. Additionally, other companies claimed they would pull their business from the state of Florida. This didn’t dissuade the governor.

“Some of these organizations say they’re not going to hold events if you do this, just let me say very clearly, in Florida, we’re going to do what’s right, will stand up to corporations, they are not going to dictate the policies in this state,” the governor said according to The Blaze. “We will stand up to groups like the NCAA, who think that they should be able to dictate the policies in different states.”

DeSantis’ point was a good one: while an organization or business has the right to take its presence elsewhere, a decision made on moral merit shouldn’t be swayed by a monetary incentive. In other words, DeSantis believes it is wrong to allow boys to come in and swoop up the girls awards, so giving in to the NCAA because it would be more helpful for his budget would be a corrupt thing to do.

“You can’t be cowed by these organizations, or particularly by woke corporations from doing the right thing. And so my view was throughout this whole time, we have to protect our girls, it is discriminatory to force them to compete against biological males,” DeSantis continued during his Fox interview. “And so if the price of having a tournament is that I have to deny equal opportunity to hundreds of thousands of young girl and women athletes throughout Florida, I am much more willing to stand with the girls. And to hell with these events.”

Will other states follow suit? Possibly, but for now, at least the girls in Florida can enter the athletic arena with the safety of knowing they won’t be massively outgunned by someone likely capable of doing much more damage than they themselves.