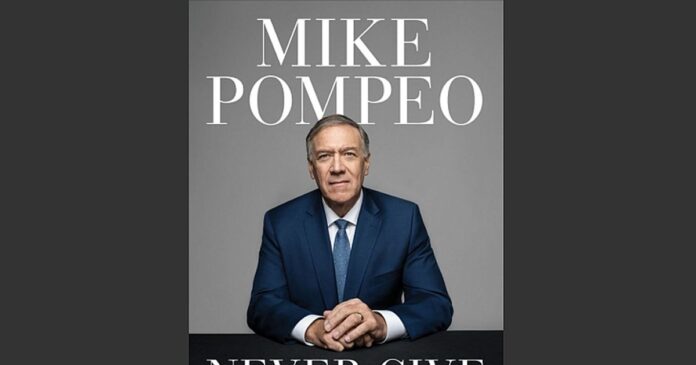 Mike Pompeo released a new book this week, “Never Give an Inch: Fighting for the America I Love,” and it’s already at number five on Amazon’s best-seller list. Pompeo, who’s been a congressman and served as CIA director and Secretary of State under Trump, has had plenty of dealings with the Washington media, and now he’s listing the most obnoxious and lazy of the bunch (which is saying a lot).

Let’s start with Chris Wallace and Andrea Mitchell. Pompeo–who looks almost unrecognizable on the cover of his book after his dramatic weight loss—writes:

When Wallace was with Fox, Pompeo said he appeared on a Sunday show and the newsman tried to stir up a nonexistent feud. “He spent the first half of the interview questioning the president’s mental fitness. He was trying to get me to trash President Trump,” wrote Pompeo.

In an interview with Mitchell about Iran, wrote Pompeo, she tried to “bait me” to criticize Trump. “Her question was childish and petulant,” he wrote, adding, “She was simply playing the D.C. progressive game so that she could go to cocktail parties and croak with her peers in the media elite that she had tried to embarrass the president and me. I refused to give an inch, even in the face of incoming fire.”

He even cited reporter Bob Woodward, who Trump told Pompeo to talk to despite his reluctance. He gave Woodward 15 minutes one day. “I did my best to comply with the president’s direction, but I didn’t provide anything of value to a reporter who was writing a book with the singular purpose of destroying all that I was working to achieve. Moreover, he used the risk that someone would have dished on me to try and coerce me to dish on others. Sick,” wrote Pompeo.

My favorite dis, however, was to “conservative” (not really) pundit Bill Kristol. Pompeo, who is rumored to be considering running for the presidency in 2024, writes that Kristol, perpetually aggrieved Trump-hater Jim Acosta, and the Washington Post’s self-described Never Trumper Jennifer Rubin all tried to convince the public that he conspired with other Trump team members to use the 25th Amendment to remove the president.

Pompeo wasn’t having it:

Sorry, Bill Kristol, I never seriously discussed the Twenty-Fifth Amendment with [Mike Pence] or any other official. I never even joked about it. Now that you’ve beclowned yourself within the conservative movement, maybe there’s still a place for you with your friends at the Lincoln Project. And take Jennifer Rubin with you.

Ouch! Tell us how you really feel, Mr. Pompeo.

He also writes how CNN’s Christiane Amanpour threatened to boycott an awards dinner if Pompeo attended (how very impartial of you, Christiane), and how one NPR reporter tried to bait him with Ukraine questions (this was long before the current Ukraine-Russia war). He asked her to point the country out on a map–and she couldn’t do it! I’m laughing as I type.

Pompeo says he’s gotten used to it after all his years in politics, but is still irked by some of the antics of our wholly biased, factually-challenged mainstream press. “We dealt all the time in the administration with nasty reporters who trampled on facts,” he writes. “The correct response to this kind of harassment is to grow thicker skin, step up your game, and keep winning for America.”

Well said. While I don’t think Pompeo has a good shot at the presidency, I applaud him for speaking out and exposing some of these “respected journalists” for what they are–completely partisan Democrat hacks.

The book starts out strong (you can “look inside” at Amazon and get deep into the first chapter), and promises a lot of good “inside baseball” stories, not just details on which journalists are the worst (as much as I love reading about that).

Like him or not, at least Mike Pompeo’s fighting back.