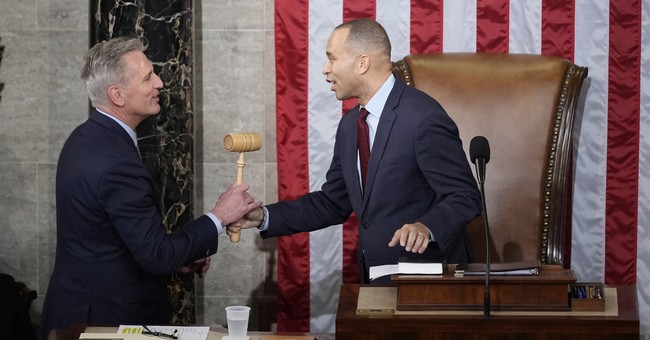 Newly minted House Speaker Kevin McCarthy is facing his first major test since winning the contentious battle for the position.

Hakeem Jeffries, the Democrat House Minority Leader, has reappointed Adam Schiff and Eric Swalwell to the Intelligence Committee. That comes after McCarthy vowed to keep the two rabid partisans, both of which abused their positions under Nancy Pelosi’s rule, on the sidelines. Jeffries seems content to push the issue, though, setting up a clash that will no doubt be very public.

Here’s a bit of what Jeffries wrote to McCarthy, per The Washington Examiner. To call it shameless is an understatement.

“I write today to submit for renomination two eminently qualified legislators to continue their service on the House Permanent Select Committee on Intelligence: Ranking Member Adam Schiff and Representative Eric Swalwell of California. Together, these Members have over two decades of distinguished leadership providing oversight of our nation’s Intelligence Community, in addition to their prosecutorial work in law enforcement prior to serving in Congress,” Jeffries wrote in a Saturday letter to McCarthy.

In other words, Democrats don’t want to play by the new rules they instituted when they held the House majority. After four years of Pelosi’s tyrannical reign, where she essentially operated as a monarch, Jeffries now wants Republicans to take a step back and unitarily disarm. With all due respect, Jeffries should be told to go jump in a lake.

Later in his letter, the minority leader tried to draw a distinction between the removals of Marjorie Taylor Greene and Paul Gosar from their committees and Swalwell and Schiff. It doesn’t begin to wash.

“It does not serve as precedent or justification for the removal of Representatives Schiff and Swalwell, given that they have never exhibited violent thoughts or behavior,” Jeffries wrote in the letter.

Actually, it absolutely serves as a precedent because the precedent that was broken was allowing the minority party to dictate its own committee members. Pelosi, Jeffries, and every other Democrat who voted to remove Greene and Gosar violated that precedent. Now, they should be made to live by that violation.

This is a game Democrats constantly try to play. Take the filibuster, for example. Senate Democrats have continually floated the idea of ending the filibuster only for certain bills they want to pass (i.e. their federal election takeover), presenting it as an “exception.” But that’s not how it works. If one party makes an “exception” for one thing, then the other party is able to make “exceptions” for their priorities. It’s the same dynamic as the judicial filibuster, which was removed by Harry Reid for lower court appointees only to have Republicans remove it for the Supreme Court.

There are no “exceptions” in Congress. There are only precedents that are either violated or not. In this case, Democrats chose to violate a big one, and they can’t claim arbitrary distinctions now that it’s coming back to bite them.

Besides, Schiff’s lying to the American public and selectively leaking classified information is a far greater offense than Gosar putting out a silly “violent” anime video. Swalwell having an affair with a Chinese spy while misleading the public is worse than Greene making a comment she quickly apologized for. There is no justification to keep Schiff and Swalwell in their positions because they abused them in ways that can’t be ignored.

In the end, this will be McCarthy’s decision because the Intelligence Committee is a select committee. There is no reason to fold here, and if the new Speaker does, it will signal that the GOP majority is feckless. I don’t think he’s going to fold, though. Jeffries is spitting into the wind, and it’s about to blow back on him.