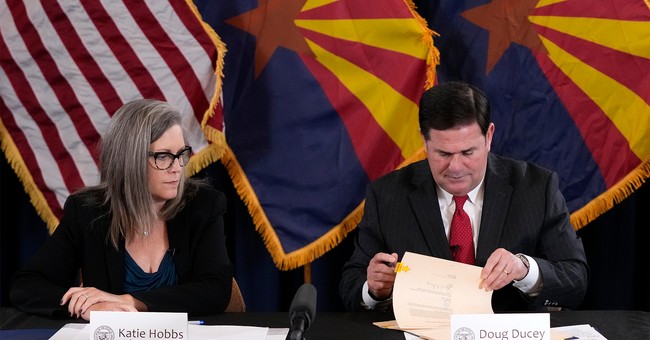 On Friday, Arizona Governor Katie Hobbs (D) announced plans to continue transporting migrants out of the state, a controversial policy that started in 2022 under former Governor Doug Ducey (R). Hobbs said her plans to transport migrants out of state are different from Ducey’s program because she will focus on getting migrants to the US cities that are their final destinations, often where their sponsors are.

Another difference in the program is that while Hobbs renewed the busing agreement on January 13, Governor Hobbs, keeping the same vendor to provide service, Hobbs also intends to fly migrants out of state.

Ducey sent migrants to “sanctuary cities,” often Washington D.C. or New York City, and was a recipient of condemnation from the White House for politicization. Ducey previously stated that all the migrants who were transported did so voluntarily.

In a press conference, Hobbs said that the program provides value to overwhelmed border communities and says the destination change would benefit the migrants, saying,

“It’s something that provides support to those local communities, if we’re spending money to bus people, why not just get them to their final destination?”

The Arizona budget allocates about $15 million annually to transport migrants, and the current program costs about $1 million monthly. Under the Ducey administration, a single bus transport cost about $82,000, and the installation of shipping containers at the border and their subsequent removal as ordered by the federal government cost roughly $200 million.

In a statement made after the press conference, Hobbs’ press secretary Josselyn Berry said that the administration is seeking to find more cost-effective means of transport, writing:

“We’re sending migrants to cities they actually need to go to and be connected with their sponsors, and we are doing it in a more cost effective way by looking at all travel options, not just buses.”