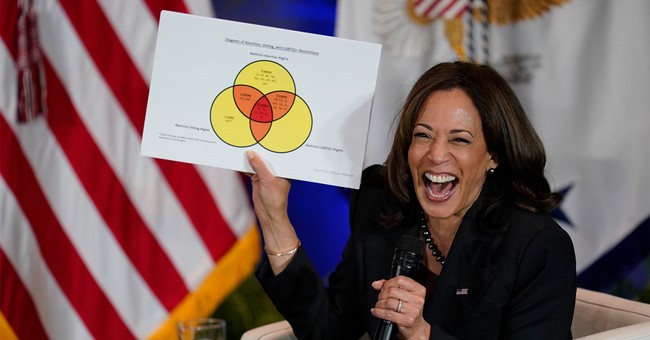 I regret to inform you that Kamala Harris is doing Kamala Harris things again. The comically uncharismatic vice president appeared in Florida over the weekend to hold a pro-abortion rally. Harris originally wanted to do the event at the Florida State Capitol building but her request was rejected, likely with some input from Gov. Ron DeSantis.

So why does the second most powerful person in the country need to go to the Sunshine State to stump for abortion? I’m glad you asked, and we’ll get to that, but first, let’s just marvel at the raw political talent that Harris possesses.

During her fiery speech, she decided to channel Greta Thunberg, albeit with a slight variation, shouting “how dare they” multiple times at the prospect of Republicans not killing children. She’s just so darn good at this.

If you went into a lab and tried to come up with the worst politician imaginable, you’d still end up with something better than Harris. She has all the dynamism of an inebriated sloth, reading off her lines while attempting to muster up some sense of emotion and conviction. It always just comes across as inauthentic and contrived, which happens to be the perfect description of Harris as a whole.

But forget her horrible presentation for a moment. How morally depraved does someone have to be to stand up behind the bully pulpit afforded to the vice president and shout “how dare they” about people who don’t want to kill babies in the womb? How dare they? Really? Is Harris confused about what happens during an abortion? Because I can enlighten her if it’d help matters.

Of all the topics in politics, it’s the abortion debate that gets me the most, and not just because the stakes are so high. In a world that’s been turned upside down, there is no more of a perversion of basic logic than the idea that it’s a moral failing to be anti-abortion. Harris would never describe it in such detail because the pro-abortion movement lives on euphemisms, but when she stands up there and shouts “how dare they,” she’s asking how anyone could possibly be opposed to a procedure that kills a child by scrambling them and sucking their body parts out of the womb with a vacuum.

Even if one is pro-abortion, that shouldn’t be hard to understand. The basis of the pro-life movement is the protection of life. Harris may not care what happens to unwanted children, but many of us do. And no, I’m not required to support a socialistic utopia in order to be able to think taking the life of a child is wrong.