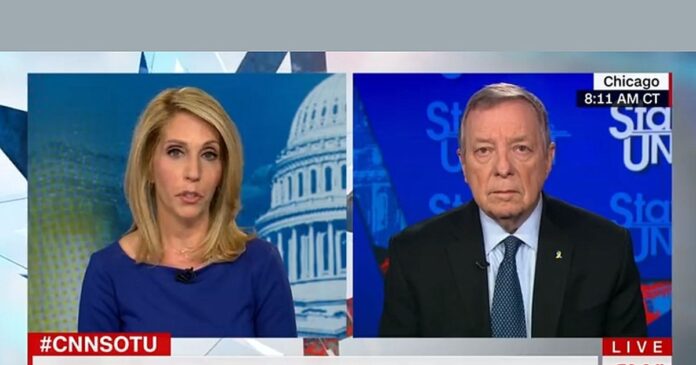 Dick Durbin of Illinois, one of the Senate’s top democrats, appeared on CNN’s State of the Union Sunday to trash President Joe Biden’s mishandling of classified documents, calling it was “outrageous.”

As we’ve been reporting, new classified docs keep showing up at Biden’s properties, and on Friday the FBI searched his Wilmington, Delaware property for 12 hours and found six more.

Durbin said it was “unacceptable”:

Well, I’m concerned. There’s a standard that we follow when it comes to members of Congress and classified information. The door to my office is closed. The person who presents the document to me takes it out of a locked briefcase, hands it to me and watches as I read it, when I finish reading it, and he takes it back and puts it in the briefcase and leaves the scene.

I mean, that’s how carefully we review these documents. To think that any of them ended up in boxes in storage one place or the other is just unacceptable. [Emphasis mine.]

While he does seem concerned about the situation, he was a lot more worked up when Trump was found to have classified documents at his Mar-A-Lago estate:

At its heart, the issue is the same. Those documents should not have been in the personal possession of either Joe Biden or Donald Trump…

It is outrageous that either occurred.

Being a Democrat, though, it wasn’t long before Durbin turned to one of their current favorite talking points: Trump’s response was somehow so much worse than Biden’s because Joe has been oh-so-cooperative and transparent:

But what happened and followed from it is significantly different. Donald Trump defied those who knew the documents were in place and ultimately led to, involuntarily, a court order and a search of his Mar-a-Lago hotel resort to find out how many documents were there.

Contrast that with Joe Biden. Embarrassed by the situation, as he should have been, he invited the government agencies in to carefully look through all the boxes he had accumulated. It’s a much different approach.

I bolded the phrase, “Embarrassed by the situation, as he should have been…” because it is completely untrue, Biden has been at turns evasive, dismissive, even downright angry whenever the media asks about the documents, and his Press Secretary Karine Jean-Pierre has been combative and anything but transparent.

I’ll give Durbin some credit for at least calling out Biden on this one. However, he loses most of his credibility the moment he tries to explain how Joe’s mistakes were innocent and somehow lesser than Trump’s. The fact is, the cases are remarkably similar, and Biden should get the exact same treatment as Trump in a fair world.

Unfortunately, with the most politicized Department of Justice in history running the show, the world is not in fact fair.