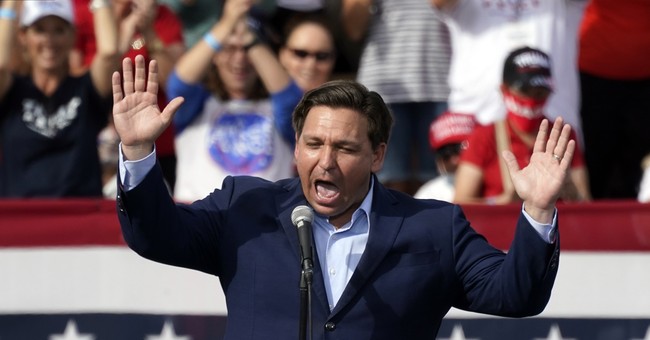 In the conservative world, Florida Gov. Ron DeSantis is really tearin’ it up.

And Saturday, he tore into Critical Race Theory.

“I mean, give me a break. This country has had more opportunity for more people than any country in the history of the world, and it doesn’t matter where you trace your ancestry from. We’ve had people that have been able to succeed.”

The notion that America’s systemically racist, he said, is “a bunch of horse manure.”

Therefore, he made a promise: He’ll stand in the way of any school board candidate that wants CRT taught to kids:

…or supports mandatory masking of schoolchildren.”

As for a ban, he’s working on that:

“Next week, I have my Commissioner of Education going to the Board of Education banning it, banning any departure from accurate history and following our standards. This is something we’ve got to stay on the forefront of.”

It’s not the first time DeSantis has descended upon Critical Race Theory.

As I covered in May, at the signing of a state tax-cutting package, he told the crowd the sheriff’s in town; and he means business:

“You know, you can put lipstick on a pig, it’s still a pig.. … So what we’re doing, the Department, the Florida Board of Education is meeting, and they are addressing this. And I told them they need to address this. And we’ve got to do it. … [I]t’s offensive to the taxpayer that they would be asked to fund Critical Race Theory — that they would be asked fund teaching kids to hate their country and to hate each other.”

He spoke of history:

“[I]t’s also…based on false history, when they try to look back and denigrate the founding fathers, denigrate the American Revolution, doing all these different things that even very liberal historians say is not supported by the facts. … [I] think what we need is, we need the Constitution back in classrooms. We need to make sure civics is a priority, but it needs to be taught accurately. It needs to be taught in a fact-based way, not an ideological-based way.”

The man’s got a mallet, and he’s not afraid to use it.

“[I]f we have to play Whack-A-Mole all over this state, stopping this critical race theory, we will do it.”

Whack-A-Mole’s a great analogy — it’s a game in which the player must remain relentless.

Speaking to Bongino, he appeared ready to do just that:

“As you said, these local elections matter. We are going to get the Florida political apparatus involved so we can make sure there’s not a single school board member, Republican, who ever indulges Critical Race Theory.”

We’re a ways from the next presidential election, but could DeSantis be the man to stare down President Kamala?

Donald Trump isn’t necessarily out — on June 1st, NBC News ran “Trump’s Back. Here’s What His Re-Entry Means for 2024.”

And on Sunday, Yahoo News offered “Trump Says It’s ‘too early’ to Tell if Pence Would Be his Running Mate in a Possible 2024 White House Bid.”

In May, Trump told interviewer Candace Owens, “[I] think people are going to be very, very happy when I make a certain announcement.”

Meanwhile, surely some see Ron as a contender.

Of course, a lot can change between now and then.

What do you think — between the two, who would be most likely to beat America’s first female president?

For the time being, Ron’s focused on Florida.

And on the fight in front of him.

“Okay, so how do you have a society if everything in your society is illegitimate? So it’s a very harmful ideology, and I would say, really, a race-based version of a Marxist-type ideology. So we’ve banned it in our schools here in Florida. We’re not going to put any taxpayer dollars to Critical Race Theory, and we want to treat people as individuals, not as members of groups.”

Meghan McCain Flogs Fauci: The Scientist ‘Wanted to Be a Kardashian’

Biden Commissions the Class of 2021: Rise up and ‘Root out Systemic Racism’