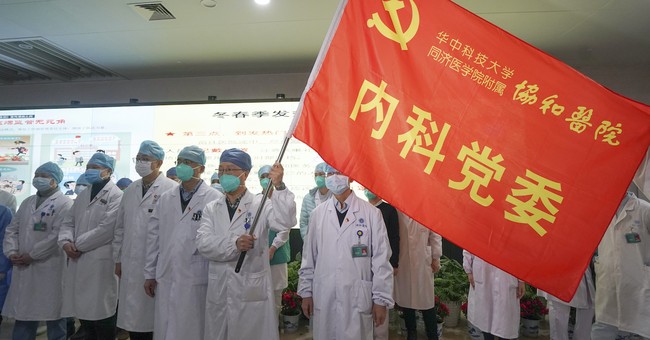 Late Friday the British publication DailyMail reported that the United States Department of Defense provided $39 million in grant funding to “EcoHealth Alliance” as part of the aggregated grant funding received by EcoHealth Alliance to conduct various types of “gain of function” virus research – a type of research in which scientists engineer viruses to make them more transmissible or lethal and which can be used to create bioweapons.

EcoHealth Alliance used a large amount of its funding to support research projects on the subject at the Wuhan Institute of Virology, led by Chinese “bat virus” expert Dr. Shi Zenglhi — the “Bat Lady.”

While the Daily Mail report is exhaustive, I think it is important to note that RedState, led by my colleague Scott Hounsell, was asking questions about US government funding gain-of-function research at the Wuhan lab back in February.

Further, back on May 11 — three weeks ago — Scott reported on the testy responses by Dr. Fauci to questions posed to him by Sen. Rand Paul about whether or not the US government, through the National Institute of Health (NIH), had provided funding to the Wuhan lab that had been used to conduct “gain of function” research involving viral mutations such as that which is thought to possibly have created the SARS-CoV-2 virus that led to the COVID-19 pandemic. Dr. Fauci adamantly denied that NIH had funded any such research.

NIH is not DOD, so you might wonder why these references are important.

Scott has written many of his stories based on original sources like grant paperwork and other documentation he has obtained through various sources. The DailyMail story today mostly serves to only validate and corroborate much of what Scott has already reported. From the DailyMail:

The charity, EcoHealth Alliance (EHA), has come under intense scrutiny after it emerged that it had been using federal grants to fund research into coronaviruses at the Wuhan Institute of Virology in China.

Scott’s story on Dr. Fauci’s testimony on May 13 included a link to the USASpending.gov website showing that EHA received a direct grant of $3.7 million from the NIH.

On that link, you can scroll down to a chart labeled “Award History” you see the individual transactions involving the distribution of grant funds by NIH to EHA. There are 9 disbursements, the most recent of which was July 13, 2020. There is another drop-down menu there labeled “Sub Awards,” and if you hit that button you see seven distributions of grant funding — five of which are to the Wuhan Institute of Virology.

But NIH is only one government agency that provides grant funding. The bigger story is found when looking at the totality of grant funding that was sent out through USAID — including funding which came from the Department of Defense — through its “PREDICT” program. As the DailyMail story notes, the total of ALL grant funding to EcoHealth Alliance is $123 million, with $39 million coming from the Pentagon.

USAID is an independent agency of the federal government which provides foreign aid and development assistance to foreign countries. As the name implies, it exists for the purpose of giving away US taxpayer dollars to foreign interests. The funding is supposed to further US interests in those foreign locations and is normally intended to address socioeconomic issues in the developing world.

The “PREDICT” program is the key to understanding the funding of EcoHealth Alliance and its work with the Wuhan Institute of Virology. PREDICT is a research funding program launched in 2009 as an “early warning” pandemic system. Between 2009 and 2019, PREDICT funded the collection of more than 140,000 biological samples that contained as many as 1200 coronaviruses with the potential to cause human disease and pandemics. In that time period PREDICT awarded $200 million in grants before the grant funding ran out and President Trump ended the program. Of that $200 million, $63 million — nearly one-third of all PREDICT grant funds — went to EcoHealth Alliance.

EcoHealth Alliance, as Scott reported in great detail in this May 26 story, is run by Dr. Peter Daszak. For nearly a decade Dr. Daszak conducted coronavirus research with the Wuhan Lab and Dr. Zhengli. Research papers published by the two on coronaviruses identify the grant funding as having come from USAID and PREDICT. But that limited attribution didn’t reveal that the funding distributed through PREDICT had, in part, come from the Defense Department — specifically the DOD “Defense Threat Reduction Agency.”

The Global Director of PREDICT was Dr. Jonna Mazit of the University of California at Davis.

When the World Health Organization conducted an “investigation” into the origins of the SARS-CoV-2 virus, it turned to Dr. Daszak to lead the effort. He declared the origin of the virus to be a “zoonotic” transfer — occurring naturally — from an animal to humans in an unknown fashion.

We now know — based on Scott’s reporting — that Dr. Daszak was the driving force behind the letter published in the March 7, 2020 issue of Lancet, one of the leading medical journals in the world, signed by 27 scientists from around the world and declaring the origins of the SARS-CoV-2 virus as natural and not the result of any activity taking place at the Wuhan Institute of Virology.

One of the scientists who signed that letter endorsing the view that the virus developed in a zoonotic manner was Dr. Jonna Mazit, Global Director of PREDICT, who ran the program that directed Defense Department research money to EcoHealth Alliance and Dr. Daszak.

The DOD Defense Threat Reduction Agency is charged with developing tactics and strategies to counter weapons of mass destruction — including bioweapons.

EcoHealth Alliance took funding for research from that USAID, money that came from a Unted States Department of Defense bioweapons research agency, and spent it doing research on bioweapons with a state-run bioweapons lab in China.

Therefore, the United States military was (possibly unwittingly) funding bioweapons research at a military bioweapons lab in China. For years.

The information is out there. Scott Hounsell and RedState just beat the rest of the media to it.