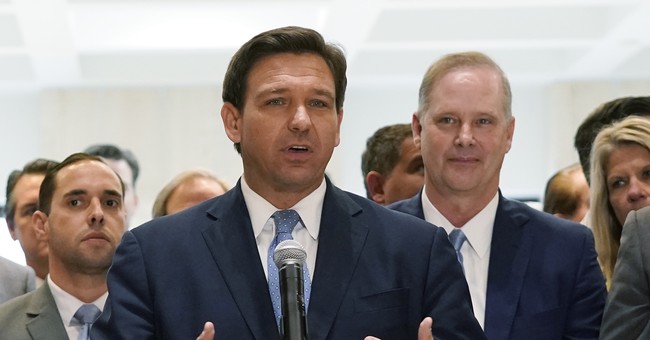 Gov. Ron DeSantis took aim at some of the bureaucracies behind managing the pandemic as well as Dr. Anthony Fauci during a press briefing yesterday.

DeSantis took Fauci apart over his flip-flops, saying some of what he was propagating wasn’t supported by the science.

“This bureaucracy needs to be brought to account. You can’t have a bureaucracy that’s just going out and issuing these rules on the fly. They literally said, ‘If you’re sunbathing on a cruise ship you have to wear a mask.’ Really? I mean, give me a break. I think now with Fauci’s emails … it’s pretty clear that a lot of this stuff was fly by the seat of your pants guidance. This was not based on hard data.”

DeSantis then pointed out that while there was evidence pointing to the lab leak theory, Big Tech was shutting any questions about that down on social media.

“In fact, there were people who were showing, one pointing out that this thing came from the lab. If you said that a year ago, corporate media said you were a conspiracy theorist,” he said. “Facebook would de-platform you for saying that.”

Last week, DeSantis signed an anti-Big Tech censorship bill dealing with exactly that kind of a question, as we reported.

DeSantis said they haven’t been able to find any linkage yet to prove it developed naturally and that the lab leak theory was the “most plausible explanation.” But that raised the question as to why Fauci and others had been sending grant money to Wuhan. He then went after the question of gain of function research. “I’m sorry,” he railed. “That is not an appropriate use of taxpayer money. When he testified many years ago that doing gain of function research, the risk of having a pandemic is worth doing the research, I disagree with that. I think this has been a disaster what’s happened and China’s covered it up, they need to be held accountable. But the bureaucrats in the United States also need to be accountable.”

Now, this is what every Republican should be saying, what every member of Congress should be bringing up at every hearing and media event. This is not acceptable and we need answers, not only from China but from our own officials as to the decisions that have been made. Good for DeSantis for taking up the mantle, setting exactly the right tone, and demanding accountability. This is why people see a leader in DeSantis — because he’s willing to take on the fights and call things out.