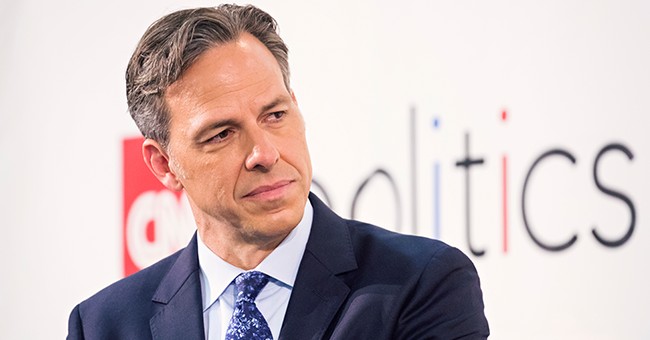 Yesterday, Jake Tapper blew up any remaining credibility he had in an attack on Rep. Elise Stefanik (R-NY).

He told Politico that he hadn’t invited on anyone who spread the “Big Lie” about the election since Jan. 6. Politico claimed that included people like Stefanik, although no one said what “lie” she had actually told.

But then Stefanik dropped the facts all over Tapper, which showed that even his program’s senior producer had reached out to her, begging for interviews multiple times in the past few months since Jan. 6, including around the time that Rep. Liz Cheney (R-WY) was removed from her leadership position and Stefanik was elected by Republicans to replace her.

Tapper had a hissy, throwing his staffers under the bus and claiming he couldn’t account for every email from his bookers.

Of course, that didn’t pass the smell test — Stefanik was responding because she’d been specifically named in the Politico article.

We pointed out how he got roasted for the lie. People reminded him of CNN’s track record of b.s. for the last four years, including over Russia and that he had on Stacey Abrams to pitch how the Georgia governor’s election was stolen from her.

Apparently, actual lies are acceptable for booking — if spouted by Democrats.

Chris Wallace had also busted the greater point about Tapped not wanting to have people on. Wallace called that “moral posturing” inconsistent with news gathering. What a great description of Jake Tapper and CNN in general.

It was also pretty bad that Tapper and CNN have been promoting not only the Democratic propaganda terms by calling questioning election integrity the “Big Lie,” but also invoking a term used by Adolf Hitler. That’s not journalism; that’s political agenda and narrative.

But, I also wanted to make a couple of other points that shouldn’t be left out.

So, if Tapper wrote this book, should he be barred from his own show, according to his own rules?

But, what was just killer was the review that CNN wrote of the book, twenty years ago today on June 5, 2001. Back when CNN was a real news network — and before Tapper was an anchor for them.

What Tapper doesn’t do is justify the title of his book. The tactics employed by both candidates may have been something short of pristine ethically, but the author offers no evidence of “dirty” dealings by either side. Did political convictions color their actions? Of course. Did they break the law? Probably not.

Was there a conspiracy by one candidate or the other to gain the White House by theft? If there was, Tapper offers nothing to prove it.

He does uncover one tidbit much more unsavory than anything that was seen on television during the recount. Citing a single source, he asserts that a post-election conference call among GOP “operatives” included a discussion of how to pump up the military absentee vote for Bush:

“According to a knowledgeable Republican operative, in the course of the conversation they discussed having political operatives aboard and near military bases encourage soldiers who had registered to vote – but hadn’t yet done so – to fill out their ballots and send them in. Voter registration ID made it so they could identify not only which soldiers, sailors, and airmen were Democrat and which were Republican, but which were black and which were white. They would target the right ones.”

If such an operation was carried out and the ballots were in fact included in the final tabulation, then laws were broken. But Tapper offers no evidence that anything came of the conversation. He even admits, in a postscript, that he didn’t make his case: “Whomever you think the subtitle of the book applies to, we [Americans] are the ones who let him try to steal the presidency.”

Such assertions are disingenuous, at best. Tapper does a credible job of exposing some of the shenanigans that were played by all parties during the Florida recount. But he jeopardizes his credibility by making a promise he can’t keep. He isn’t going to unveil “a plot to steal the presidency,” and he knows it. That makes him, at the end of the day, no better than the politicians, elected officials, lawyers and judges he excoriates in his book.

Talk about a kill shot right there. Thanks, CNN.