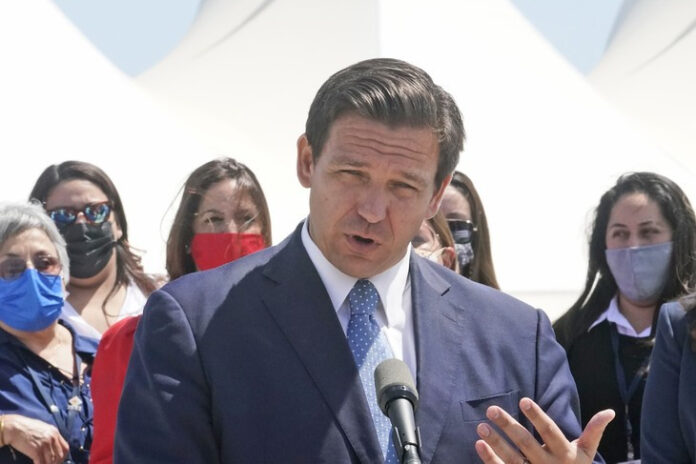 Men like Donald Trump and Ron DeSantis are the people that the media fears the most. They know that they cannot control them or force them to do things they know are wrong. Their only hope is to convince enough people that they are terrible people who do not deserve to be in positions of leadership. All they can do is try and destroy their character.

The media works at every level to find ways to tell their lies. The Miami Herald is no exception. There last few news reports on Ron DeSantis have been fabricated messes. They have had Democrats tear into them for their fake news before, and they blow it off and continue to tell their lies.

They have made it their mission to attack DeSantis at every turn. The end game is to destroy him, so he will cease to be a significant contender for the White House in a few short years. The Democrats are running scared because they know their time is short in leadership.

One of the most blatant lies that they told came out being that “Ron DeSantis prioritized seniors over all others on vaccine distribution.” This one report was the defining moment that put the Miami Herald on a list of untrustworthy news agencies.

One source that the Herald had used in the past was Rebekah Jones. This lady flat out has been discredited and even terminated because she is just that bad. But what is even worse is how the news media continues to quote this rotten fake as a reliable source.

Jones claimed that DeSantis told her to give false data regarding the COVID-19 numbers for the state of Florida. Her lie would be her downfall, but the news would relish in her lies.

The data was asked to be taken down because it had not yet been cleared by epidemiologists. It was literally restored the next day. https://t.co/Auvpn7cIKw

The Miami Herald even went so far as to praise her for lying. The reported that she had been promoted to a whistleblower, which means absolutely nothing in the real world. But in the liberal world, it is the next best thing to a presidential award.

The report noted that “The DeSantis administration has worked long and hard to discredit Rebekah Jones, fired last year from her job as a data analyst after she accused state health officials of pressuring her to manipulate certain coronavirus numbers.”

They just could not believe that the governor would even combat their lies with the truth. They were hoping that he would miss the story and not tell the truth with facts of what really happened.

The Inspector’s General’s office was the agency that granted her the much-needed promotion to a whistleblower. A promotion that is not hard to achieve in Florida. All the person has to do is work in government and tell information that would lead to a criminal conviction of another person.

And what is harmful to Jones is that later on, she would admit that she lied. The Democrats golden girl would betray them and confess that she lied about what she was told to do by DeSantis.

Jones would later be arrested for her hacking into a state-run message system. She claims she was trying to encourage others to follow her criminal path. Jones’s future looks bleak, except she might have a new roommate in prison.

The media needs DeSantis to stop telling the truth. It is the only way that the Miami Herald is going to be able to tell their lies about the man.

They need Jones to resurrect the story somehow and find other ways of lying about the governor. But now that she has been fired, that is going to be hard to do. Time is short for the nasty Miami Herald. DeSantis has already blasted several of their attempts to take him out. Their reputation was taken through the mud and left to rot like roadkill.

So it seems natural that they would like to be vindicated. But now that Jones is toast and the world knows how rotten they are, it does not seem likely that they will ever be trusted again. Ron DeSantis is a man that tells the truth and has the integrity to back it up.