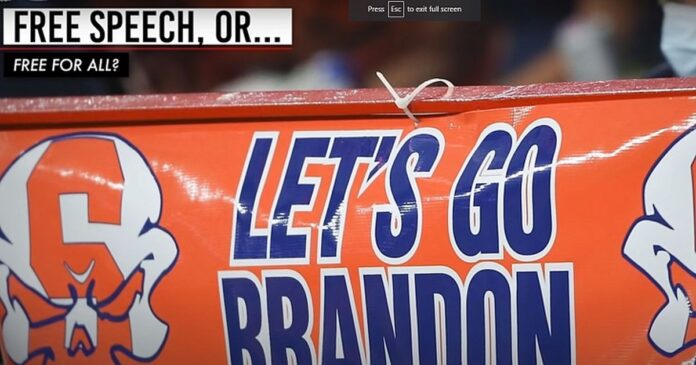 Well, the Red Wave didn’t pan out as we hoped, and Sen. Raphael Warnock just beat Herschel Walker to give the Democrats a 51-49 majority in the Senate–but that doesn’t mean everybody loves the party’s standard-bearer, President Joe Biden. In fact, his approval rating still stands at a miserable 38 percent Wednesday, with an astonishing 56 percent of Americans indicating disapproval of his job performance. Why that didn’t turn into a Republican landslide in the midterms is frankly beyond me.

But the news isn’t all bad–a Georgia-based company says sales of its “Let’s Go Brandon” wrapping paper are on pace to double last year’s. If there’s anything that’s going to get us through these fraught times, it’s humor.

Fox Business reports that demand for the Brandon-themed wallpaper is skyrocketing:

Freedom Speaks Up, formerly “Bring Ammo,” says what began on a mere whim last year ended with over 500,000 square feet – more than 6,000 pounds – of the novelty wrapping paper being sold.

“We’re having tons of fun with this, there’s no way to spend $20 bucks and get more smiles on Christmas morning,” [Company CEO Seth] Weathers said in a statement.

The Let’s Go Brandon phrase became a source of innumerable internet memes, which you can get a chuckle out of here, while also earning chants at sports stadiums across the country:

Although the phrase reached the height of its popularity in 2021, the wrapping paper sales prove that the chant still maintains its renown. Critics have pointed out that the original chant was vulgar, and decidedly low-brow–and they aren’t wrong. However, what I love about “Let’s Go Brandon” is that it isn’t vulgar on its face, yet it effectively sums up the frustrations of millions of Americans in one catchy blurb.

I’ve used this 1984 author George Orwell quote before, but it’s so good I’ll use it again: “Every joke is a tiny revolution.”

So true. While Joe Biden and the Democrats seem hell-bent on permanently changing the country we loved into something unrecognizable, and the majority of America’s voters seem inexplicably bound to go along with it, the one weapon we must never give up is humor.