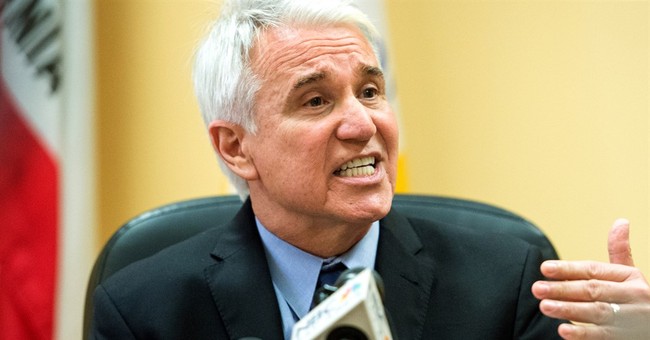 Los Angeles District Attorney George Gasc?n is ordering prosecutors to give illegal immigrants more favorable treatment than U.S. citizens, according to a report from Fox News. The new policy demands that DAs will have to weigh the effects of criminal charges on suspects and try to find diversion programs in order to avoid deportations.

The policy makes no bones about its aims–keep illegals out of prison and safe from deportation, even if they’ve offended:

“All charging determinations shall be undertaken with the goal of avoiding or mitigating the adverse immigration consequences of a decision when known, possible or permitting,” the policy says. “Under these circumstances and when, consistent with public safety alternatives to filing charges exist, those alternatives shall be pursued.”

Criminal enhancement charges should also be avoided, according to the directive. Such charges can include things like gangs enhancement, great bodily injury enhancement, or gun enhancement, and can lead to sterner sentences:

According to the policy, which was obtained by Fox News, alternatives to criminal convictions should be considered, such as avoiding charging for criminal enhancements, which can significantly increase one’s prison sentence, “that would turn an otherwise immigration-neutral offense into an immigration damaging one.”

This latest woke policy from Gasc?n appears to show outright favoritism to illegals, or to put it another way, outright discrimination against legal citizens.

The new marching orders, like virtually all of Gasc?n’s radical proclamations, will not make our streets safer–in fact they will only make them even more dangerous. RedState managing editor Jennifer Van Laar brought you the tragic story of Drew Rosenberg, who was murdered in 2010 by Roberto Galo, an illegal with previous charges who had been given lenient treatment by the policies of former California Attorney General Kamala Harris and then-San Franciso Mayor Gavin Newsom. His father blamed Drew’s death directly on their soft-on-crime methods:

Rosenberg believes his son’s blood is on the hands of Kamala Harris and then-Mayor Gavin Newsom because it was their pro-illegal alien policies that allowed Galo to remain in the country, to remain on the streets, and to have access to the vehicle with which he ran down Drew Rosenberg.

Despite several previous vehicle crimes, Galo eventually only served 45 days for Rosenberg’s death. How could that have happened?

…[Harris and Newsom] (who owe their political lives to notoriously shady former San Fran Mayor Willie Brown) are at fault because, Rosenberg contends, Newsom instituted a “policy” in September 2009 to not impound the vehicles of illegal aliens arrested for driving without a license, and Harris’s office had a similar policy, to not prosecute unlicensed drivers unless they had been in a fatal collision, both of which benefited Roberto Galo.

Although Drew Rosenberg’s father doesn’t directly blame Gasc?n for his son’s death, this is exactly the kind of “change” that George wants for LA.

Naturally, the District Attorney’s office issued one of their word-salad statements saying how great the policy is and how it will “prioritize” safety. Notice that they never say exactly how it would achieve that goal:

“The Los Angeles District Attorney’s Office consulted with our staff, community stakeholders and immigration experts to craft a comprehensive Immigration policy that protects vulnerable victims and prioritizes safety while attempting to avoid overly punitive consequences for the accused,” Tiffany Blackwell, communications director for the DA’s office, said in a statement to Fox News Digital. “We believe that we have achieved that result.”

Gasc?n has been a one-man wrecking crew for the City of Angels, and his lenient approach to criminals has led to daily stories of random attacks, smash-and-grab robberies, and a general sense of fear on the city’s streets. Unfortunately, two attempts to recall him failed, leaving him free to pursue this latest terrible policy. Once again, he’s just made our streets that much more perilous.

Read: RedState’s extensive coverage of Gasc?n and his dangerous regime.