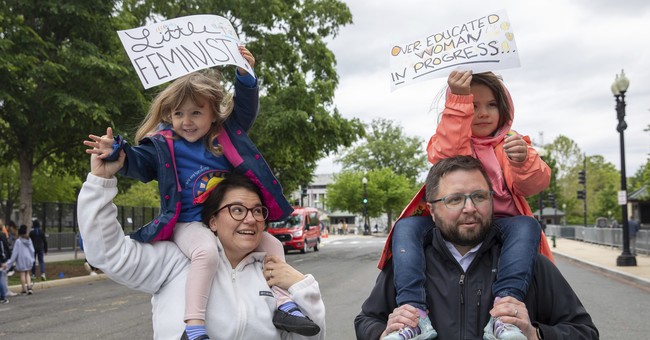 The opinions expressed by contributors are their own and do not necessarily represent the views of RedState.com.

I found a leftist cultural project I can support. And I mean it. Honest. I’m willing to throw money in the pot too. Count me in soy boys, ladies with underarm hair and pink hair on your head. I’m with you. Hey, you pretend men with working uteruses. I am an ally.

When a Supreme Court rat leaked the Dobbs v. Jackson slip-opinion, the left went off their collective rockers over it. There was a lot of wailing and gnashing of teeth. Women across our fair land were super-duper upset that unfettered abortion could be a thing of the past. Women, mostly in California and New York, were aghast. They grabbed their torches and took to the streets. They ignored the fact that if they lived in New York and California, the pink-haired ladies could still murder their unborn children mostly unfettered by law or conscience.

You saw the protests, right? I saw them and what struck me was most of the women appeared to be overweight shaved-headed lesbians or, as an alternative, coyote-ugly women that… let me put this gently – might have trouble finding a sober mate.

These protests went on for months until the final Dobbs decision was released and yes, indeed, the Supreme Court returned the issue to the states. California and New York women (or men with uteruses) could still have unprotected sex with drunks and abort and murder their babies. I watched several disgusting scenes of women proclaiming that they “loved” killing their babies. Awful stuff, no doubt.

But, in the midst of mindless depravity, there was a glimmer of light. I watched as soy-boy allies of the now and future aborters proclaimed their solidarity. Wearing their man-buns and unkept beards, they stood with hairy lesbians and any women who might find them attractive. These men who, long ago, burned their Man Cards held signs up that they would commit to vasectomies.

The first time I saw these signs I said to myself… “Self, these soy-boys are doing God’s work.” Not consciously mind you, because they don’t believe in God, but for the greater good.

According to Fox News:

Evan Pulgino was a Seattle resident. He snipped his cords in solidarity. He told the local news:

“Half the country lost their rights. Pregnancy requires two people, and it’s not fair that the burden falls on one person because they’re the ones that can get pregnant.”

Yes – Evan looks like what you thought he’d look like – complete with beard and holding a cat.

At one clinic, vasectomies increased 900 percent. That’s awesome news. There is little to no chance that males seeking vasectomies in response to the Dobbs decision were anything more man-bunned hipsters who will use their proof-of-vasectomy like their proof-of-vaccination as their “in.” In short, these guys will whip their cards out to show a woman that they are ready for “safe sex.” The benefits for society are multiple. Your average fixed liberal “man” isn’t likely to father any prodigy meaning they won’t be reproducing a junior man-bunned soy-boy who is likely to turn into a transitioned soy-girl in 15 years. Secondly, the woman he has sex with won’t be getting pregnant. In theory – but I like my theory.

And lastly, we have the added societal benefit of, in a generation, the Soys having far fewer children.

I’ll start a foundation that will sponsor thousands of soy boys for vasectomies. The acronym would be SBV (SoyBoyVac). The mailers would include a photo of a soy boy with a longing look, pointing at his crotch, the caption:

Can you help this Soy get a vasectomy?