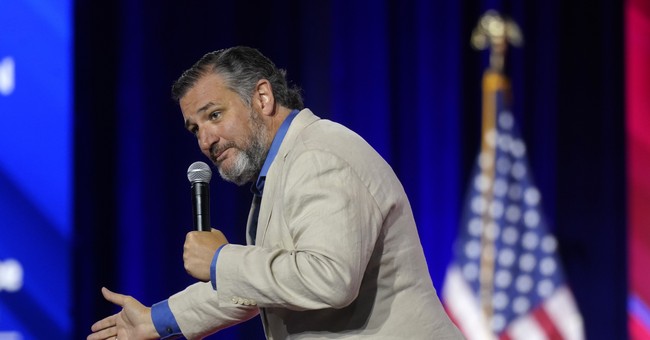 Fresh off winning back the House of Representatives, Republican leaders have a great idea on how to capitalize on the power voters have given them: Give Democrats exactly what they want.

We’ve already seen that play out with the passage of the Orwellian-named “Respect for Marriage Act,” which enshrined gay marriage at the federal level. A dozen Republican senators chose to not stand up and force the passage of Sen. Mike Lee’s amendment that would have protected religious liberty, and naturally, the next betrayal is already being prepared.

Sen. Mitch McConnell has been meeting with the White House and is pushing to pass another omnibus spending bill that would fund Joe Biden’s agenda for the next 10 months. You might ask why Republicans would want to do that when they are just a month away from having the power of the purse. That’s a good question, and one Ted Cruz is sounding the alarm on.

He appeared on Newsmax on Thursday evening in an attempt to talk some sense into his colleagues.

To pass an omnibus appropriations bill at this point would be snatching defeat from the jaws of victory. The entire point of taking back the House was to be able to rein in the Democrat agenda going forward. To sign another blank check covering nearly half of what’s left of Biden’s presidency would be nuts. And guess what happens when we get to late 2023, just before the presidential primaries begin? The argument by McConnell will then be that Republicans must fold again because a shutdown would cost them the 2024 election.

I don’t think I’m alone in saying that I’m sick and tired of these games. If there is never a time to stand up and say enough, then what is the point of even attaining power? Besides, the idea that Republicans are going to be rewarded by voters if they fold and don’t force Democrats to own a government shutdown is not backed by any evidence. Remember, McConnell refused to engage in this fight last year, and the GOP still underperformed in the last election. Contrast that with the fact that Ted Cruz helped lead a government shutdown in 2013 that was followed by a GOP wave in 2014, and there’s just no correlation.

So what is the point of giving in here? What is the point of ceding the power voters just gave you? And why would those voters want to hand you more power if you can’t even be counted on to do something as simple as stand firm on demanding a shorter continuing resolution? Those are questions the Republican leadership needs to answer because they’ve lost all credibility at this point.

Unfortunately, Cruz might as well be talking to a wall. McConnell has already met with Biden, Pelosi, and Schumer, and the details are probably already hammered out. Will enough Republicans grow a spine and refuse to vote for what is ultimately proposed? I wouldn’t count on it.