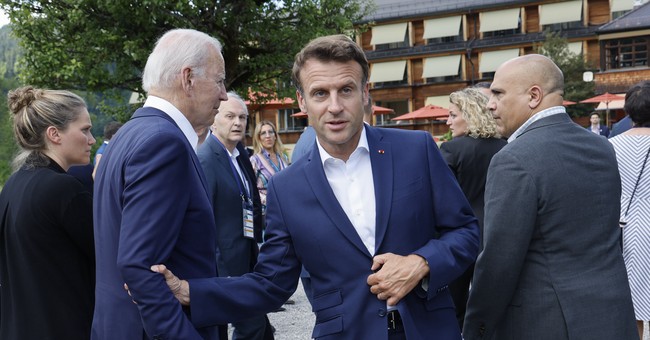 As I reported earlier, Joe Biden met, on Thursday, with French president Emmanuel Macron. He even threw a state dinner in Macron’s honor, the first such dinner in Biden’s term in office. We noted the very dinner menu caused problems because while they were serving butter-poached lobster, Joe Biden has been strangling the lobster fishing with regulations, and even Rep. Jared Golden (D-ME) called Biden out for the harm that he was doing to the industry and to the fishermen.

But Joe Biden being Joe Biden, you knew that there were also going to be problems during the time with Macron.

It’s a mistake to try to give Biden too much to read because you have to know that somehow he’s going to mess it up. But whoever was behind the planning of this event, gave him stuff on the history of the relationship between the U.S. and France to read from his notes. We’ve heard that Joe Biden was not exactly a top-notch student when he was in school and he showed he must not have absorbed much about that history. He doesn’t seem to have ever learned the correct pronunciation of “Marquis de Lafayette,” something most of us probably learned by junior high school at least.

Biden was also an hour and 22 minutes late for his press conference with Macron.

Even then, Biden admitted he was working off a list he had been given of people on whom to call.

Macron even had to help him when Joe appeared confused and asked, “Is it my turn to call on someone?”

But then it got worse at the state dinner, where Biden was forced to read more history, as it was evening — when Joe’s issues get worse. That’s where he really went over the edge.

“France was our first ally. First, country to fly the American flag after our revolution,” Biden said. “And Frank hosted the first diplomatic post before more than anything else France has been our first friend.” What? Did he just call France “Frank”? And then the rest of it didn’t make any sense. It’s as though he was reading it, dropped a line, and smushed two disconnected sentences together, then had no idea what he had said and that it made no sense. I can’t imagine what Macron was thinking although the way he dealt with Biden was like a grandson escorting his debilitated grandfather around.

The world has to be laughing at us when they see crazy things like this.