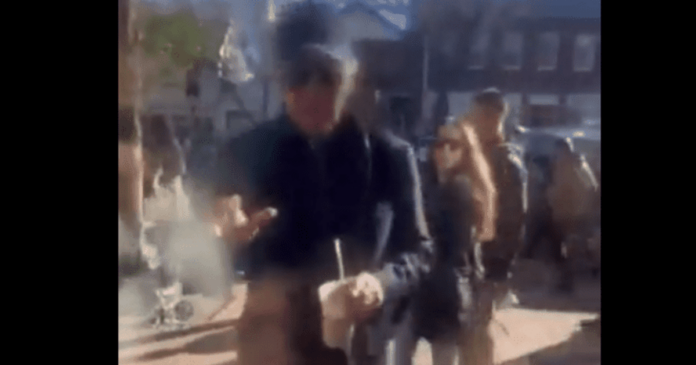 As we have reported, Joe Biden has been in Nantucket vacationing over the Thanksgiving week and, while out shopping in town with some other members of his family, hasn’t been doing well with his media interactions. He caused an uproar, for example, when he indicated he wanted to ban all semi-automatic weapons, which can be virtually all modern guns.

But during one outing in town, the following photo was taken by the Nantucket Current, which has been covering Biden’s visit. The photo got a lot of comments, with many people describing it as “creepy.” It’s already a meme everywhere.

One wag compared it to a Jack Nicholson in “The Shining” kind of vibe, “Here’s Joey!” Others noted that Joe probably couldn’t engage in his seemingly favorite habit of sniffing people since there was a window in between.

Now we’ve seen a lot of creepy and questionable pictures and comments from Joe Biden concerning women and girls over the past few years, everything from his account about the hair on his legs, comparing a little girl to a 19-year-old because she has her legs crossed and barrettes in her hair, and falling off his bike because he was so eager to stop and talk to yet another little girl.

The context behind the picture was that Biden had been walking past the Lemon Press Juice Shop, where he stopped to interact with the little girls who saw him and called out to him.

“There’s Joe! Oh my God, hi!” one of the children can be heard screaming as the president gingerly walks down Main Street sipping his drink through a straw.

Biden stops dead in his tracks upon hearing their excited cries and instantly walks toward the window and waves.

What added a twist was that Rep. Adam Kinzinger (R-IL) — He Who Is Soon to Be out the Door — came rushing to Biden’s defense because of course he did.

It sounded like Kinzinger was trying to audition for his CNN/MSNBC commentator spot as the new “conservative” voice, with his defense of Biden. What’s funny is that the video didn’t change that Biden came over to the kids, it confirmed that the picture was true. But Kinzinger didn’t understand that he was confirming the truth of the picture by posting the video. And for many, the video didn’t make it any less creepy. But yes, Adam, there is something wrong with showering with kids, sniffing them, or talking about them rubbing the hair on your legs.

Women accused him of inappropriate touching during his presidential campaign. There is a boatload of pictures of Biden interacting with the children of members of Congress that have raised concerns. But all that has been conveniently forgotten by people on the left and their fellow travelers like Adam.