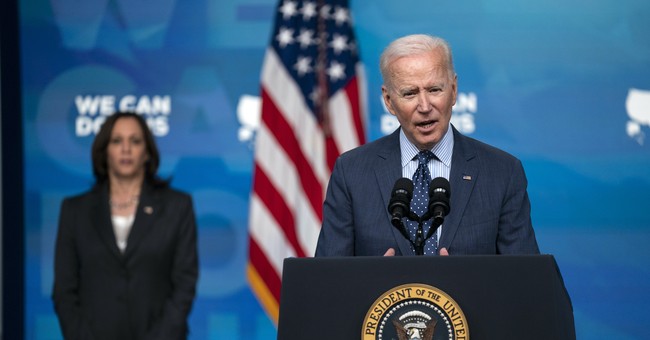 But once again he seemed to have difficulty reading his teleprompter.

First, he misread “shedding” as “shredding.”

Then Biden seemed to slur or shorten his words, “Now how do we keep beaing this virus,” seeming to drop the “t” in “beating.” Then he goes on to read “May 4” as “May four” rather than May Fourth.

But perhaps the worst response was the one that was actually clear.

Biden was asked if he thought he was being tested by Vladimir Putin. His response? “No.”

Now, if he truly doesn’t believe he’s being tested by Putin, then he’s incredibly ignorant and he failed the test.

Putin has been testing him since he came in.

Putin tested him by massing troops on the border with Ukraine and Biden backed away from sending ships to the Black Sea as a warning. Putin tested him by challenging him to a debate and Biden backed away. Putin tested him with pressure on Nord Stream 2 and Biden completely caved, waiving sanctions, basically allowing it to be completed. Meanwhile, Biden did all that while making America Last — cutting the Keystone XL Pipeline and stopping oil and gas drilling leases in Arctic National Wildlife Refuge. He couldn’t do more if he were working for Russia directly.

Now we’ve had cyberattacks by Russian criminals. Experts have said that’s a common tactic from Russia to use criminal gangs to have some plausible deniability when they do launch cyberattacks and they believe Putin is testing Biden in the run-up to the summit with Russia in Geneva. First, they hit oil with Colonial Pipeline, causing shortages and rising prices, and got a ransom paid into the bargain. Then they hit meat with the attack on JBS.

The latest attack that we don’t know all the details about yet is on the Massachusetts Steamship Authority, the ferry service that runs to Martha’s Vineyard and Nantucket, that was hit today, just as we start into the summer. Think that’s just a coincidence? This was also a ransomware attack. And it’s hitting basically in Barack Obama’s backyard.

Now, once Colonial Pipeline paid the ransom, you knew there would be more. But it’s not a coincidence that all these are coming now and if Biden doesn’t get it or isn’t willing to address it, that’s a real problem. One might think he was “flexible” for Russia, just like his former boss.