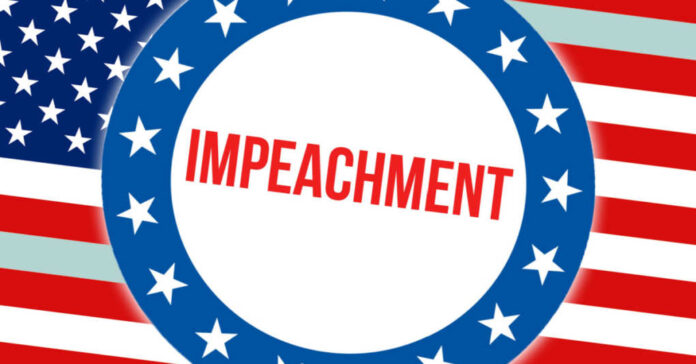 With Republicans successfully retaking the majority in the House of Representatives, everyone is expecting impeachment trials to begin in short order. But you might be surprised to learn that the top of the list does not show President Joe Biden’s name.

Now, to be sure, I think I can speak for most GOP members in saying they’d love to see Biden impeached or outed from his current seat in some fashion or another – and the sooner, the better.

However, seeing as how the Republicans didn’t retake the Senate as well as the House and that their majority is not nearly as massive as was previously expected, the impeachment of Biden might not be as doable as we’d all like.

Of course, that doesn’t mean investigations into Biden, his son hunter, and his family’s business deals won’t be opened. It just means that some smaller fish might be taken out first.

The why shouldn’t be that hard to ascertain. After all, under Mayorkas, our national security and border issues have only grown. Each month, the number of illegal border crossings grows. And each month, it seems that Mayorkas and his ilk do less and less about it.

In fact, in recent months, they’ve cut even more Trump policies, either out completely, as they did with his “Remain in Mexico” and border wall construction, or at least down to the studs.

And that’s given Republican Representatives and leaders like Arizona’s Andy Biggs to move towards investigations and trials against the sitting Homeland Security head.

Now, this isn’t the first time such investigations and questions surrounding Mayorkas leadership have been called into question. But given that the Democrats who appointed him have held the majority in both legislative houses and the White House for the last two years, it’s understandable that any such efforts would have been shelved for a time.

But it’s clear by calls like the one by Biggs that a renewed interest in them has awakened.

In fact, in August, even before the Republican majority in the House was materialized, Biggs outlined a plan to go after Mayorkas, as well as Biden and Attorney General Merrick Garland. And it’s not as if his plan is likely to go unnoticed or unsupported.

In recent months, two big hitters, GOP Senators Ted Cruz of Texas and Lindsay Graham of South Carolina have targeted Mayorkas, accusing him of “gross dereliction of duty” for what has been allowed to happen at our southern border with Mexico.

Their October letter to Mayorkas noted that the problems stemmed from his agreeing to end working Trump policies like Title 42 deportations and wall construction in place of “lax border policies” that have “encouraged millions of aliens” to illegally cross the border. Mayorkas was also blamed for the current and growing drug and human trafficking problems seen at the border.

It is important to note here that the battle is still an uphill one, as Democrats will likely fight tooth and nail to both keep Mayorkas and his leftist-loving policies right where they are.

However, even if they don’t succeed in getting Mayorkas, Garland, or Biden kicked out of office, such investigations are likely to open the floodgates on an untold number of facts that American people deserve to know – from current border problems to the depth of corruption by the Biden family. And in time, those could lead to impeachment trials.

As it stands now, other representatives, including Jim Jordan of Ohio and James Comer of Kentucky, have announced investigations will begin as soon as the new Congress is sworn in, in January, into a number of things, including the Bidens.

It will undoubtedly be interesting to see just what the congressional Republicans do with these investigations and where they lead in the coming months. Who knows, it may just see us with a new president sooner rather than later.