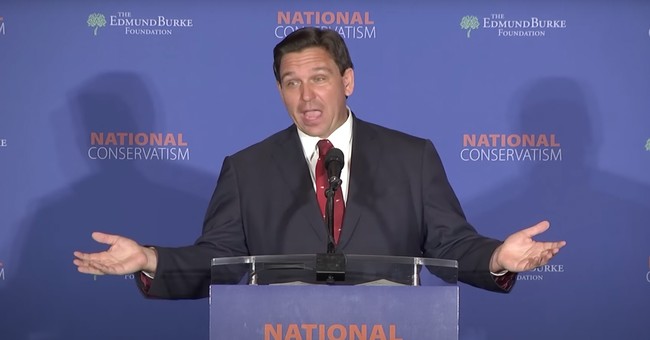 As DeSantis’ star has grown, the attacks against him have become more and more absurd. What political observer could forget when ’60 Minutes’ tried to accuse him of selling access to the coronavirus vaccines? Or when the press rallied around a mentally-ill grifter who lied about DeSantis forging COVID-19 data? Even the White House has accused him of essentially murdering people.

Given that, it was just a matter of time before things got even weirder, and boy, have they gotten weirder. According to a supposed former inmate at Guantanamo Bay, Cuba, DeSantis led a “torture” regime against him and others at the prison.

To start, it’s pretty much impossible to corroborate any of this, though, the former prisoner in question does appear to be real. Was DeSantis there? Did he order that this man be “tortured?” Absent military records, no one has any real idea, and we are left being asked to take the word of one man. What’s his angle? Why is he just now sharing this? Again, no one has any real idea.

What we can do is talk down the actual accusation, which is fairly absurd. Apparently, at least according to this former prisoner, DeSantis signed off on him being forcibly fed “Ensure” while he was on a hunger-strike. Yes, you read that right. The rockstar governor’s grave sin, if it’s even true, was saving a man’s life who was trying to commit suicide. That’s apparently what passes for “torture,” these days. Another accusation supposed that DeSantis laughed while the feedings took place.

With that out of the way, I don’t believe this at all. DeSantis being some television-style torture boss doesn’t make any sense given what we know about his military service. He was a JAG who served in the Middle East. Was he ever even at Gitmo?

Besides, I’m fairly positive that military members serving at Gitmo don’t go around using their real names while interacting with prisoners. That would be a minimum level of safety given you are dealing with accused terrorists. How would the man in question even know he was dealing with Ron DeSantis? Even assuming the baseline charge is true (a massive assumption), this could easily be a case of mistaken identity.

So where is this all coming from? I’m not sure, but I doubt this former prisoner just found his way to that podcast by sheer chance. There is a coordinated effort to try to take down DeSantis going on right now, and unfortunately, he’s taking fire from both the left and a small contingent of “influencers” on the right who promote this kind of stuff.

None of it is going to matter. DeSantis’ record speaks for itself, and even if you connect all the dots here (which don’t actually appear to connect), the accusation boils down to DeSantis stopping people from dying. I’m pretty sure he can weather that storm.