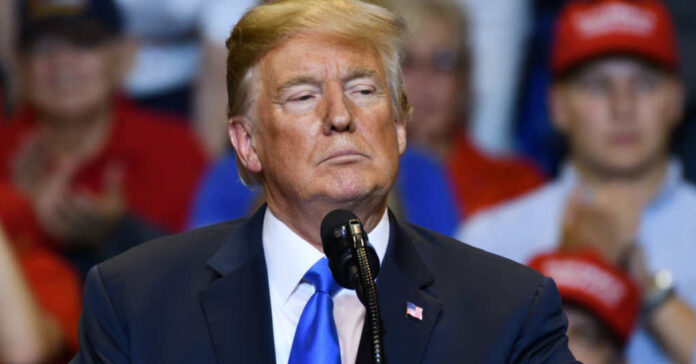 Mick Mulvaney served as acting White House chief of staff for former President Donald Trump, but he is no longer in Trump’s corner. Mulvaney recently condemned his former boss calling him “the only Republican who could lose.”

Trump made his official announcement on Tuesday declaring that he will run again for president in the 2024 presidential race. Mulvaney also said that a Trump candidacy is not good for the GOP.

“I think he’s the only Republican who could lose,” Mulvaney said on CNN.

The former White House chief of staff predicted that Trump will likely become the Republican nominee due to his hard-core, right-wing supporters. He believes they can push him over the finish line “under the winner-take-all primary system.”

The problem, as Mulvaney sees it, is that Trump will ultimately distract voters from the terrible presidency of Joe Biden. He said that this would help Democrats keep control of the White House.

Mulvaney said, “That means the 2024 race is not about Joe Biden or whatever Democrat is on the ticket, not about inflation, not about world events, not about abortion. It will be about Donald Trump, the same thing we saw in 2020.”

He also gave his thoughts on the 2020 election saying that no one really voted for Joe Biden in the last election. They were either voting for or against Donald Trump. The last election was a referendum on Trump. And Mulvaney said the same thing could happen again in 2024. He just doesn’t see the outcome being different two years from now than it was in 2020.

Mulvaney believes that someone like DeSantis could beat Trump head-to-head in the primary. But he explained it this way, “But it’s not going to be a head-to-head race. There will be five or six other people in the race and he’ll get the 35 percent that really supports him and under the winner-take-all primary system, he’ll be the nominee.”

According to the most recent election data coming out of the midterms has revealed that Trump preferred candidates earned less support from voters than moderate Republican candidates. That is the position that Senate Minority Leader Mitch McConnell, like many other Republicans, is taking. We lost many campaigns because we lost the moderate to independent voters. And this occurred when we had the most unfavorable political environment for Democrats than we have had in hears with high inflation and an unpopular president.

Mulvaney is not alone; former Vice President Mike Pence made clear his position on Trump running again by saying, “I think we’ll have better choices.”
The governor of Arkansas, Asa Hutchinson, agreed with that saying, “Trump is correct on Biden’s failures, but his self-indulging message promoting anger has not changed. It didn’t work in 2022 and won’t work in 2024. There are better choices.”

Chris Christie, the former Trump advisor and governor of New Jersey, said that voters had clearly “rejected crazy” at the ballot box after Trump-endorsed candidates suffered surprising defeats in the midterms. Christie, a former chair of the Republican Governors Association, reminded a crowd of hundreds of Republicans that there were 31 Republican governors when he departed in 2014, and now there are 26.

And New Hampshire Gov. Chris Sununu added that Trump announced he was running for president from the low point of his political career and out of his self-opportunity and weakness.

When Trump announced about running again, the crowd roared as he took the state with Melania and other family members. His son-in-law, Jared Kushner, was there without Trump’s daughter, Ivanka. She has announced that she will stay out of politics this go-round and focus on her children.

If Mulvaney and others are right, the stakes for 2024 could not be higher.