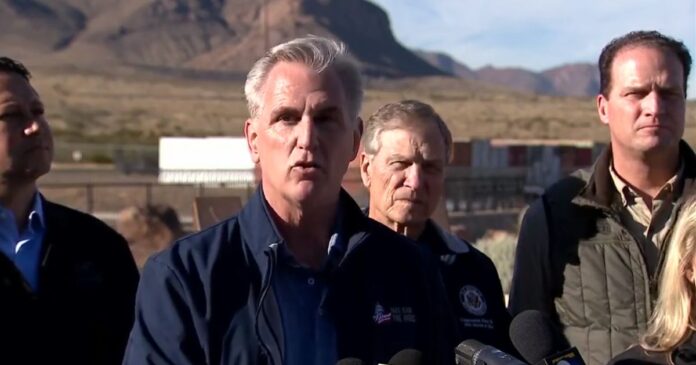 Early Tuesday House Minority Leader Kevin McCarthy, who’s seeking to again become Speaker of the House in the next Congress, announced that he would have a “major announcement” regarding DHS Secretary Alejandro Mayorkas at an afternoon press conference in El Paso, Texas. As many speculated, McCarthy’s announcement had to do with Mayorkas’ continuing service. McCarthy essentially told Mayorkas, “Resign, or we’re going to investigate you… and maybe impeach you.”

“In 42 days the united Republican House takes control. In 42 days we end one party Democrat rule in Washington. The new House Republicans will work to stop Joe Biden’s assault on our laws, our borders, and our border agents. We will use the power of the purse and the power of the subpoena. Now, let me be clear, those responsible for this disaster will be held accountable. I’ve spoken today again with Congressman Jim Jordan and Jamie Comer, the future chair of Oversight and Judiciary committee, and they have my full support to investigate the collapse of our border and the shutdown of ICE enforcement nationwide.

“Our country may never recover from Secretary Mayorkas’ dereliction of duty. This is why today I am calling on the Secretary to resign. He cannot and must not remain in that position. If Secretary Mayorkas does not resign, House Republicans will investigate every order, every action, and every failure. We’ll determine whether we can begin an impeachment inquiry.”

With Mayorkas’ numerous appearances before committees over the last two years, including just last week when he clearly lied about the border being closed, don’t Republicans already have enough to begin an impeachment inquiry? Why waste our time with endless hearings and poring over every document in front of the cameras? We’ve only got two years. It’s time for action.