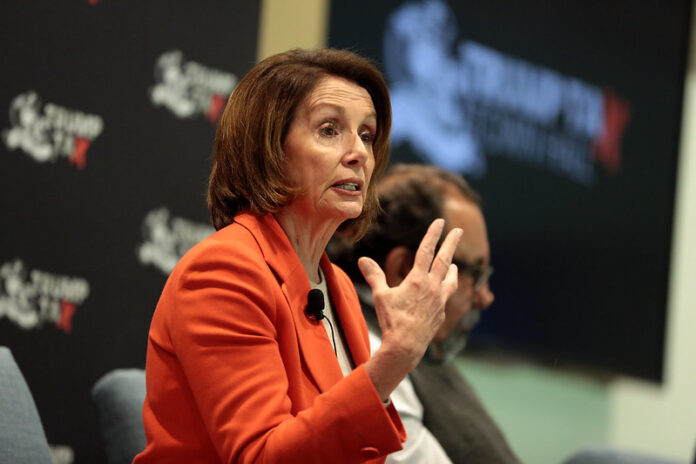 Nancy Pelosi has spent entirely too long in Congress. She’s one of the reasons, at 80 years old, why many younger Republicans (and Democrats) are fighting for term limits. She’s proven that she’s not interested in negotiating and she’s more than proven that her ideas are too liberal for the average American.

When can we expect to see her retire once and for all?

Well, she’s threatened to step down on more than one occasion.

In 2016, we fully expected her to depart the House of Representatives. She felt that once Hillary Clinton won the presidency, her policies would remain intact.

That didn’t happen, though. Instead, Donald Trump won the presidency. To ensure that her policies stayed firmly embedded within U.S. politics, she stayed on. And she’s continued to stay on even after Trump left office.

When Biden made it in and Kamala Harris became the first female VP, Nancy Pelosi could have easily stepped down. However, her staying says several things.

One, she isn’t confident in the Biden-Harris administration.

Two, she doesn’t know how to function if she’s not holding as much power as possible.

Many wonder whether she would have stepped down even if Clinton had won. For many years, Pelosi has been the highest-ranking female in the U.S. government. Harris becoming VP has since stripped her of this power status.

If she were to wait until the end of Biden’s presidency, she would be close to 84 years old. Surely, she has other things she wants to do than battle it out with the GOP on a daily basis. Despite telling reporters that she’s “a street fighter,” she is getting older. While her mental capacities haven’t shown signs of slowing down like Biden’s have, we do have to wonder what’s waiting for her outside of Congress.

Nancy Pelosi is married. She also has children – and nine grandchildren. She does have a personal life. Does she really believe that U.S. politics would be lost without her so much so that she would give up retiring to be with her family?

Every two years, the House chooses a new Speaker. For the longest time, the Democrats have chosen to continue voting in Pelosi. They could choose someone else, yet they feel powerless to do so.

What this means is that Pelosi will remain as Speaker until at least 2022. At that point, she has a few decisions. She can choose to step down as Speaker or she can resign.

It is unlikely that she would step down without also resigning. It would mean that she’d have to be a Representative without holding the power – and that’s not something that she’s had to do in a very long time.

She may also choose to resign before the 2022 elections, especially if it looks as though the Democrats could lose more seats. The GOP made a significant amount of leeway in 2020, taking more House seats than anyone could have anticipated.

As the liberals continue to fail over the next two years – regarding COVID, riots, anti-policing efforts, and more, it may cause voters to jump to the side of the GOP.

If the GOP takes the House, Pelosi automatically loses her position as Speaker. She won’t go down without a fight. She is the kind of person who wants to control every political move as is within her power.

She won’t allow the Republicans to kick her out of her position. So, she’ll stay at least through 2022. She may resign on her own or she may stay if the House remains in the power of the Democrats.

Of course, if she’s waiting until a female becomes president, she may end up taking another title – the oldest person to ever serve as a member of Congress. Currently, that title belongs to Representative Ralph Hall, who died in office at the age of 89.

We’ll just have to wait and see. If the GOP has their way, she’ll be booted in 2022, taking her seat right out from under her.