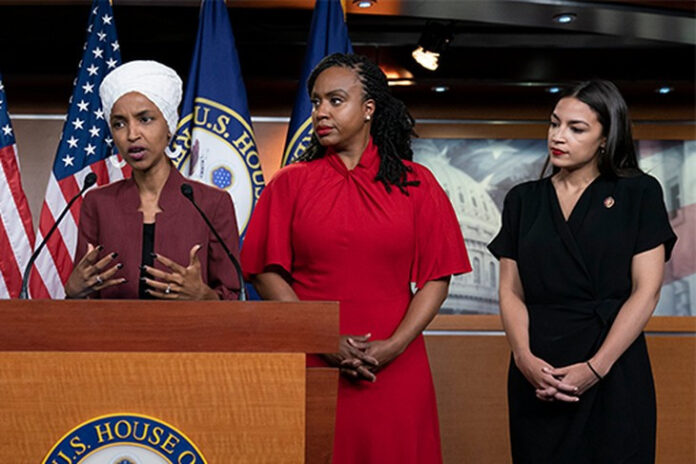 The police is not going to be defunded. Although there are plenty of left-wing liberals who think that’s the only way to prove that the U.S. isn’t systemically racist, it will never happen. However, there is a need to conduct a reform. It’s critical that the police departments are playing fair – and that society as a whole knows that they’re playing fair.

Only, the Squad has a few plans of their own.

Alexandria Ocasio-Cortez, Ilhan Omar, Ayanna Pressley, and a few of the other ultra-liberal Representatives have teamed up once again to show that common sense isn’t inherent.

On the anniversary of George Floyd’s death, lawmakers are looking at how best to address police brutality. And, it seems that Congress may actually get somewhere.

The only problem is that there are a few ultra-liberals standing in the way of any meaningful progress.

There’s already a bipartisan commitment to see police reform. This is thanks to Senator Tim Scott and Senator Cory Booker. Their joint statement identified, “While we are still working through our differences on key issues, we continue to make progress toward a compromise and remain optimistic about the prospects of achieving that goal.”

Positive change is exactly what we need – and it can be done without defunding the police and tearing apart law enforcement agencies.

Officer Chauvin, the man responsible for kneeling on Floyd’s neck, has been convicted of second-degree unintentional murder among other charges. This means that justice has been served.

Many within the Black Lives Matter movement would argue that justice has not been served.

The “Squad” is insisting that any proposal that hits the table needs to include reforming qualified immunity. In a letter that they presented, it identifies that they are concerned that the provision that would end qualified immunity could be removed so that a bipartisan deal is struck.

Specifically, they say, “Given that police violence, as a weapon of structural racism, continues to have devastating and deadly consequences for Black and brown lives across our country, we strongly urge you to not only maintain but strengthen the provision eliminating qualified immunity as negotiations in the Senate continue.”

Of course, none of this really makes any sense. Police violence can easily affect any group of people – not just people of color. And, there is a significant amount of diversity in law enforcement agencies to ensure that Black and brown lives are not impacted negatively.

Essentially, qualified immunity is what allows law enforcement officers from being individually liable unless the official violates an established constitutional right.

What the “Squad” is asking for is to allow law enforcement officers to be held personally responsible if they injure or kill a criminal, regardless of whether a constitutional right has been violated or not.

By eliminating qualified immunity from any deal that Congress agrees upon, law enforcement officers would not be able to adequately serve and protect.

The ultra-liberals are asking that law enforcement officers do their job without harming criminals, no matter what. It’s not realistic. Officers need to be able to take down a criminal that is resisting arrest. Further, they need to be able to use a weapon if the criminal is refusing to stand down.

What needs to be taught is that criminals need to listen to law enforcement.

If society as a whole would agree on that, there would be a lot less police brutality.

The liberals are about to put an end to all of the bipartisan agreements. Why? No one is ready to take away the qualified immunity except for them. If they keep pushing, no reform at all will happen – and that’s certainly not the way to honor George Floyd nor is it a way to help America.

The “Squad” won’t be happy until they can simply tear down law enforcement as a whole only to build it back up to their socialist standards.