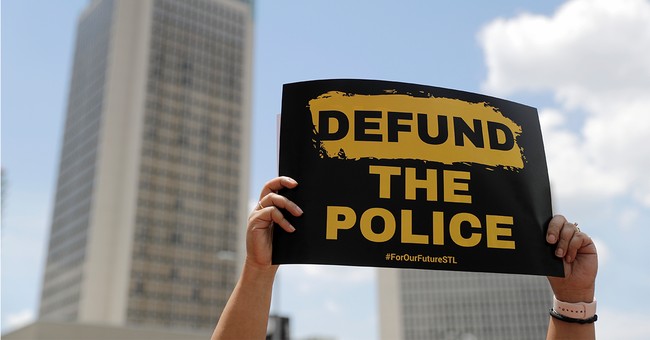 Attitudes toward police have changed.

For evidence, look no further than some of Amazon’s offerings: apparel boasting, “Blue Lives Murder.”

The phrase, of course, achieved prominence amid protests filling American streets across 2020.

But New York City’s detective union would like to change that.

“It has come to my attention that your website is selling tee-shirts (sic) and other items emblazoned with the words ‘Blue Lives Murder,'” the letter says.

“It’s disheartening that your company would allow this disgusting motto on your sales platform.”

“[Their] only purpose is to invite further division, hatred and violence toward the hard-working men and women of the nation’s Police Departments, who are toiling every day to keep their communities safe.”

“To continue to hawk products emblazoned with this vile phrase,” the missive asserts, “puts the lives of Police Officers, and all law enforcement nationwide, at peril and risk.”

Detectives were sent the letter, along with encouragement to draft their own and send those as well.

The shirts and masks certainly highlight a societal shift.

For years, on television and in film, law enforcement officers were the good guys.

Even more, they were heroes.

Kids in the 70’s loved Starsky and Hutch.

And who can forget Miami Vice?

The longest-running TV drama in history is none other than Ice-T-led Law & Order: Special Victims Unity.

One officer told the Post, “They are hypocrites. They say they don’t sell items that incite hatred. I can’t think of an item that incites hatred more than these sweatshirts.”

In February, due to its new “hate speech” policy, the site pulled Ryan T. Anderson’s book When Harry Became Sally: Responding to the Transgender Moment.

But what if it’s clothing you can read, rather than books?

[We prohibit] products that promote, incite, or glorify hate or violence towards any person or group.

How are they selling Blue Lives Murder garb? Perhaps it’s a “historical” loophole: Banned are “products that contain violent or offensive material that has no historical significance.”

So — at least for now — if you’d like a Blue Lives Murder shirt, it’s for sale.

Meanwhile, the store’s taken down items that also referenced the making of history: