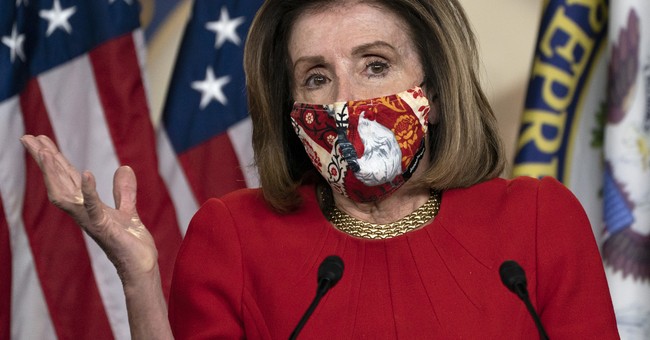 Fresh off their devastating failure to launch yet another congressional investigation into the Jan. 6 assault on the U.S. Capitol building, Democrats are pushing forward and looking for other ways to exploit the event. But, will their “Plan B” be as effective as the original scheme?

House Speaker Nancy Pelosi, along with House Democrats, is vowing to conduct their own congressional investigations into the Jan. 6 riot. The Hill reported that this process would likely “include the creation of a select committee focused solely on the violence that day – and any role former President Trump played in instigating it.”

Democrats had warned that they would take this course of action should Republicans refuse to go along with their sham investigation, which was ostensibly designed to be a 9/11-style probe into the events of Jan. 6. After Senate Republicans filibustered the establishment of the commission, Democrats fumed, whined, and wept over their loss. (WATCH: Democrats Complain About the Death of Their Capitol Riot Commission)

Using the filibuster to cover up the truth about Jan. 6 is a scandalous abuse of power that should bring the filibuster to an immediate and long overdue end. Until that happens, we will now have to move forward without the Senate to figure out how to create the nonpartisan, objective investigation into the events and causes of Jan. 6 that America deserves.

“It’s shocking that the GOP has now extended the territory of the Big Lie to cover Jan. 6 too,” he added. “They obviously can’t handle the truth.”

House Democrats have not yet indicated how they plan to proceed with their investigation. However, Senate Democrats might have a plan on how to proceed.

Senate Majority Leader Charles Schumer (D-N.Y.) has left open the possibility that the Senate will take another stab at passing legislation to launch an external investigation. But Pelosi has also hinted strongly that she’ll create a special committee dedicated to exploring the Capitol attack, just as she’s done with other prominent issues, such as climate change and the federal government’s response to the coronavirus pandemic.

While they have not yet indicated how they plan to continue using the riot as a political cudgel, one can be certain that Democrats will be implementing a new strategy soon. However, it seems clear to anyone paying attention that any tactic they choose will clearly be an attempt to salvage as much of the issue as they can.

When House Democrats launch their own investigation into the matter, it will immediately call into question the results they are sure to find – or fabricate. The best chance for expanding their exploitation of the riot was a bipartisan commission to avoid the appearance of political motivation and have at least a patina of credibility. A Democrat-led investigation is sure to prompt accusations of partisanship, and rightly so.

Even The Hill’s piece acknowledged that “any congressional investigation into Jan. 6 risks appearances that the process will be partisan and the findings will be dismissed by conservative voters as a result.” But what they don’t want to admit is that it won’t be only conservative voters who will see this for the partisan con job that it is.

At this point, it seems that the Democrats — and their close friends and allies in the activist media — have officially milked this thing for all it’s worth. They better find another way to distract from Biden’s failures and radical agenda quickly, if they know what’s good for them.