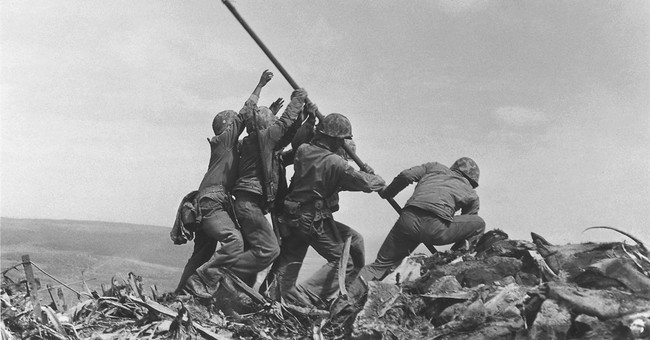 On February 19, 1945, U.S. Marines made an amphibious landing on Iwo Jima, a mere “dot” in the South Pacific, and were immediately met with horrific and unforeseen challenges. The beach of soft, black, “itchy” volcanic ash that “stuck to your skin” made sturdy footing and passage for tanks, Jeeps, and other vehicles almost impossible.

As the young Marines struggled forward, the Japanese lied in wait. The Americans assumed the pre-attack bombardment had been effective and had crippled the Japanese defenses on the island. They could not have been more wrong: the lack of response to the landing was part of Imperial Japanese General Tadamichi Kuribayashi’s master plan.

With the Marines struggling to gain a foothold on the beach, Kuribayashi’s artillery positions in the mountains above opened fire, stalling the Marines and inflicting heavy casualties.

Despite a banzai charge by dozens of Japanese soldiers as dusk fell — which included Japanese soldiers in the darkness mimicking wounded Marines and then stabbing to death those who ventured out to rescue their “wounded comrades” — the Marines were eventually able to move beyond the beach and seize one of two airfields on the Island; the stated mission of the invasion.

Within days, more than 70,000 U.S. Marines landed on Iwo Jima. Although they significantly outnumbered their Japanese enemies by a more than three-to-one margin, many Marines were wounded or killed over the five un-anticipated weeks of cave-to-cave fighting, with estimates of more than 25,000 American casualties, including nearly 7,000 deaths.

My dad, a 22-year-old tank driver from an Indiana town of less than 1,000, was one of the day-one survivors –and the war itself, having returned to Hawaii to stage for the mainland invasion of Japan — before two bombs changed history.

Memorial Day is not about the survivors of America’s wars — we have another solemn day for that. This weekend, let us honor those who paid the ultimate price to ensure our freedom.

And please, let us not let them down.