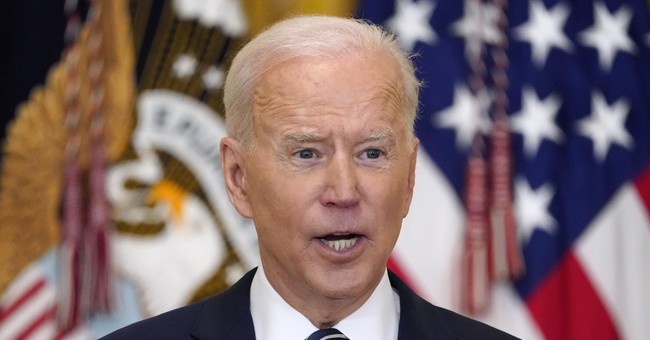 Joe Biden was at Joint Base Langley speaking to members of the military ahead of the Memorial Day weekend to recognize their service.

Biden delivered long, rambling remarks, spending a lot of time talking about his son, Beau Biden, who had been in the military. He repeated a lot of the same themes that he has in virtually every speech. That’s likely so he is able to deliver it more easily.

I reported how during the speech he mangled a portion of the Declaration of Independence, adding a couple of words and failing to include other rather important ones.

But before he got to that part of the speech, he said what a great honor it was to be there with Gov. Ralph “Blackface” Northam and two members of Congress, Rep. Elaine Luria (D-VA) and Rep. Bobby Scott (D-VA). Has Joe maybe forgotten the controversy involving Northam? Despite that, Joe was apparently still “honored” to be there with him.

Biden then praised a woman who had spoken before him, who was a veteran and was now a military spouse, there with her three children, two boys and a little girl who was no older than six. Then he turned and looked at the little girl and what he said was just beyond creepy.

“I love those barrettes in your hair. Man, I’ll tell you what, look at her she looks like she’s 19 years old sitting there like a little lady with her legs crossed.”

That clip comes from a longer video that you can see here from PBS, starting at 29:09.

Now, I’m not including a picture of the little girl, but she was most definitely NOT looking 19 in any way, shape, or form. As I said, tops, she was 6 years old, and she looked it. That’s an incredibly weird comment for him to make about anyone, much less a tiny little girl.

There have been multiple videos that have raised concerns about the appropriateness of Biden’s interactions with girls. This also brings back memories of those odd comments he made about little kids and his hairy legs when he was a young lifeguard. This was the speech during which he also referenced how he stood up to Corn Pop.