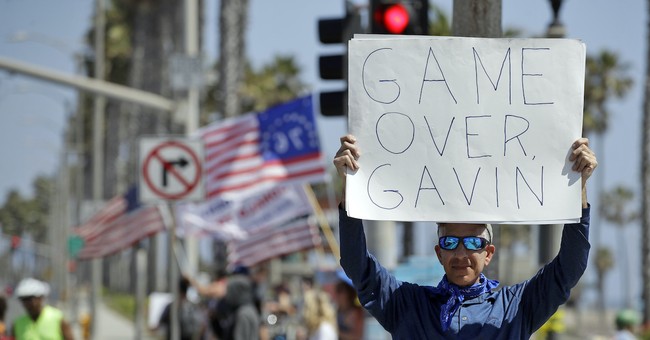 According to the 2017 changes to the Recall provision, California voters who signed the Recall Gavin Newsom petitions have 30 days to change their mind and request the County Registrar/Recorder remove their names from said petition.

Another fun fact about those changes: there is actually $5 million dollars appropriated to fund the Recall. This is already baked into the State budget. So, ignore all the Nanny naysayers crying about Recall election costs. If we can do a $116.5 million giveaway for people who get the COVID vaccination, we can fund a Recall election.

The deadline for voters to rescind signatures is in 10 days: June 8. But in viewing four counties that turned in a large number of signatures, there appear to be only 11 registered voters who have put in this request.

Eleven. I would find this extremely pathetic, if it weren’t so uproariously funny.

We don’t know yet what the numbers of rescinded signatures are from the other 54 counties in the State, but with over 1.7 million certified signatures, there would have to be a massive (and coordinated) rejection to take that number below 1.5 million signatures, which is the required amount to trigger a Recall election.

The attempt to recall Gov. Gavin Newsom is in the stage when petition signers can withdraw their signatures.

But in four central San Joaquin Valley counties, the second thoughts are few and far between.

Fresno County reports only 10 requests to pull back signatures. There’s been just one in Tulare County and none in Madera or Kings counties.

That means in Fresno County, only 0.017% of signers asked for removal.

“The next two weeks look to be quiet with a lot of preparation going on behind the scenes,” Kus said.

I suspect this will be the case in other Counties, as well.

One of the County leads for the Recall Gavin 2020 campaign put this together from the Secretary of State’s numbers:

County Numbers of Verified Signatures Compiled from the SOS website by Susan Hurd. Used with Permission.

Take the largest County in the State: Los Angeles County. With over 10 million inhabitants, 5,637,015 of them are registered voters, majority Democrat. There were 328,224 Los Angeles County signatures sent to the Secretary of State for verification, and 264,495 signatures were certified. If the majority of those voters stick with their John Hancock on the petition, and then follow it up by voting to Recall Newsom, we have no worries.

Word on the ground from both organizers and signature gathers is that this will be the case throughout. These warriors are not sitting around waiting for the Secretary of State and the Lieutenant Governor to set an election date; they are working on Recall Phase II, which includes phoning potential voters, manning information and merchandise booths, organizing and attending rallies and vehicle caravans, and assisting with data collection for Get-out-the-Vote follow-up.

Just because the noise has abated, doesn’t mean the Recall is still not in attack mode. Like a Panther ready to pounce, it is quietest before the deadly strike.

In the meantime, Dems gonna Dem. The party and the industries that prop them up (think the Public Policy Institute of California) are saying that Governor Hair Gel is doing very well, and the chances of him being Recalled are diminishing.

One State Senator tweeted that the Recall needs to happen sooner, rather than later, to ensure that Newsom comes out on top.

From the Sacramento Bee:

Things are looking up for Gov. Gavin Newsom.

After a brutal year of skyrocketing COVID-19 cases, worries about the economy, and a political revolt, the Democratic governor is now enjoying a huge budget surplus, one of the lowest case rates in the nation, and a steady approval rating.

That’s why, some Democrats say, the recall election needs to be held sooner rather than later.

State Sen. Steve Glazer, D-Orinda, floated the idea on Twitter last week, saying the best way to beat this “reckless recall” is to have an early election.

“He has rebounded well with vaccines and budget,” Glazer wrote. “His biggest threats are the unknowns: virus variant, fires, school reopening. No reason to delay and give opposition any more running room.”

Although the recall is likely to qualify for the ballot, an election has not yet been scheduled. The Secretary of State confirmed last month that the petition gathered more than the requisite 1.5 million signatures, but several things need to happen before California voters mark a date in their calendars.

It’s well within the rights of state officials to move the recall up, Glazer said, and doing so would box out the recall proponents.

“They love the maneuverability for anything to happen,” Glazer said of recall supporters. “They want to create chaos, and every day that elongates the election gives them more opportunity for chaos.”

We don’t need opportunity for chaos. His Hairfulness does a great job of creating that all by himself. This is why we’re here.