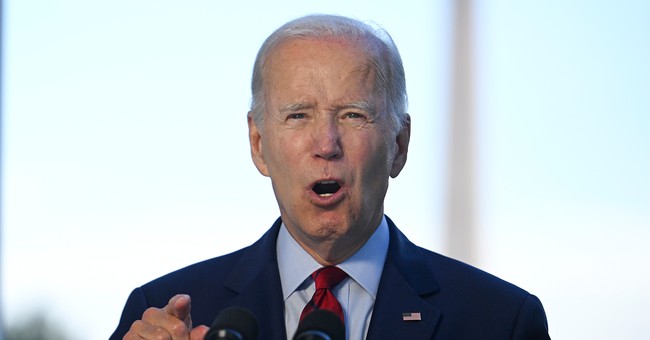 As a massive hurricane slammed into Florida on Wednesday evening, the President of the United States attended a fundraiser for the Democratic Governor’s Association. That followed a banner day where Joe Biden asked where a deceased congresswoman was at an event and got confused trying to exit a stage later at the White House.

The optics of Biden hobnobbing with his party’s elite while people’s homes while devastation descended on the Sunshine State wasn’t lost on many observers. So what did the president talk about?

If you guess that he ranted about threats to “democracy,” which is basically the one-note Democrats continue to desperately play over and over this election cycle, pick up your winnings at the window. But it was who Biden cited as an example that raised eyebrows. Apparently, he attacked Giorgia Meloni’s rise, insinuating that what “happened in Italy” illustrated the destruction of “democracy” around the globe.

For those keeping score at home, we are now at the point where Democrats will quite literally claim that a democratic election, voted on by the people, is actually a threat to democracy if the “wrong” people win. In this case, Meloni’s right-wing coalition won an overwhelming victory after Italy’s left ran the country into the ground.

The lack of self-awareness here is so thick you can cut it with a knife. It is self-evident that you can’t claim that “democracy” is in danger if you yourself don’t respect the results of democratic elections. Is Biden suggesting that Italy’s election was rigged? Or is he really saying that any outcome that goes against the globalist left is illegitimate on its face?

Whatever the reason, what Biden is promoting is not “democracy.” It’s authoritarianism wrapped in meaningless fluff disguised as respect for freedom. Real democracy can’t exist if voters aren’t able to choose the representatives without condemnation and hyperbolic proclamations from their supposed betters, of which Biden is decidedly not. The World Economic Forum and the like doesn’t get to decide who governs the people. The people do.

In short, it is not Italy’s Meloni and her coalition that are a threat to free and fair governance. Rather, it is the global left that seeks to cram down its ideology at all costs, even if it means spitting on the choices of voters that go against their wishes.

The backlash that happened in Italy is just the beginning. The left has destroyed so much that so many people held dear, and while Biden lashes out at Meloni, he’s got the same problem at home as his own Democratic Party falters. In the end, outcomes matter, and no amount of squealing about “democracy” is going to keep convincing people to vote against their own interests, whether in Europe or in the United States.