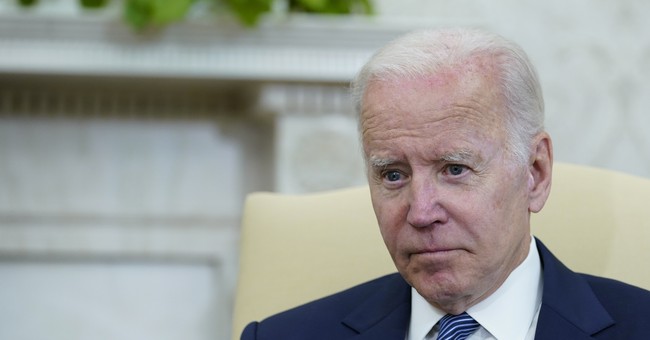 Folks in Florida have been coping with the bad conditions from Hurricane Ian. We posted about some of the wild conditions that the people were going through down there. Gov. Ron DeSantis seems to be doing a round-the-clock effort to make sure that things are getting done to help people in his state, and he’s been working hand and glove with FEMA to facilitate their actions for his people.

One of the people who has been handling a lot of the announcements regarding the hurricane has been FEMA Administrator Deanne Criswell. On Thursday, Joe Biden went to FEMA headquarters to meet with her and DHS head Alejandro Mayorkas on the response. It didn’t go well.

Biden tried to praise Criswell for her good work, calling her the “MVP.” But despite saying he had spent a lot of time with her “these days,” he didn’t even seem to know what her name was, calling her “uhh, uh, Griswell,” seemingly forgetting her first name and getting her last name wrong.

I suppose that’s better than looking for dead people in the room like he did on Wednesday. But again, it adds to the general sense that he has no idea what he’s doing and/or who he’s dealing with.

As Biden finished his remarks, he turned away from the podium and wandered off in the wrong direction, as Criswell reached out to him to get him back, saying, “Mr. President?” You can see Mayorkas wondering where the heck Biden is going as well.

Biden seemed to look around for a way out but there wasn’t one, so he started shaking hands with the FEMA workers at their desks, as the handlers chased after him to get him back.

This followed a disastrous Wednesday, where Joe Biden asked where Rep. Jackie Walorski (R-IN) was at an event. Walorski died in an accident in August, and Joe Biden had publicly honored her. Yet on Wednesday, he didn’t seem to remember that and as I wrote, the media wouldn’t let it go, peppering White House Press Secretary Karine Jean-Pierre with questions about what her explanation was for his remarks. Her answers — pretending that there wasn’t anything wrong, just repeating that Walorski was “top of mind” — just made things worse. Even the liberal media wasn’t buying it.

My colleague Sister Toldjah wrote earlier that we’re at a new place when the liberal media can’t even get around the “elephant in the room” — Joe’s mental fitness. Biden said in a recent “60 Minutes” interview that if anyone had questions about his mental fitness, “Watch me.” We have, and that’s the problem. Every day there’s a new issue, and it just seems to keep getting worse. We’re reaching a point where the reckoning on this is going to come.

When my little brother was three and we went to the beach, my dad put him on a leash so he wouldn’t wander off. We shouldn’t have to do that with the alleged leader of our country.