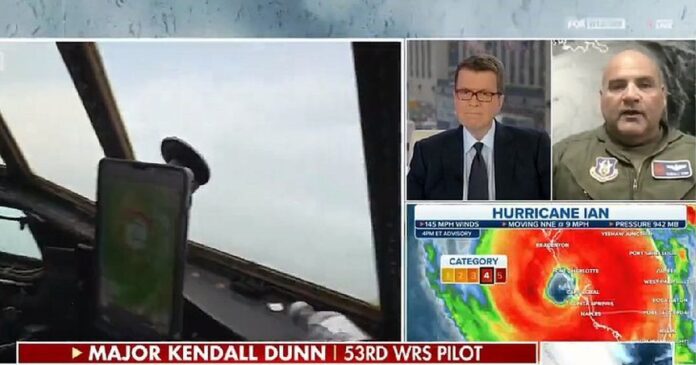 Hurricane Ian is blasting Florida at this very moment, creating power outages, storm surges, and general havoc across the state. But on Wednesday, a crew from the Air Force’s 53rd Weather Reconnaissance Squadron departed from Keesler Air Force Base in Mississippi to fly directly into the storm. Why? To collect data to help track the storm’s path and intensity.

The flight’s commander, Maj. Kendall Dunn, describes just how intense the flight was: “We flew into it, 10,000 feet and the first couple passes into the storm, standard stuff for us Hurricane Hunters, seeing 100 mile an hour winds or so,” Dunn said Wednesday in an appearance on “Your World with Neil Cavuto“:

But the third and fourth pass, they were life changers. Honestly… we were doing what we need to do just to keep the airplane airborne, keep it right side up. It was pretty intense. The eyewall was something I’ve never seen. The amount of mesocyclones and tornadoes inside the wall. It was an absolute mess.

It’s the strongest storm I’ve ever been in.

See for yourself what they experienced. If you’re scared of flying, though, maybe skip it:

Hurricane Hunters is a division of the National Oceanic and Atmospheric Administration and the Air Force Reserve; their job is to fly into storms so that we can learn more about how they function. Dunn continued:

Our radar was showing massive turbulence. The lightning, the hail. The hail itself was unbelievable. To me, it sounded like rocks being poured out of a dump truck. We had paint peeling off the aircraft when we got back. It was intense.

As of this writing, Ian has been downgraded to a Category 2 after making landfall on the southwest coast of Florida Wednesday afternoon. However, the storm is expected to continue raging on for the next few days as it moves Northward.

RedState’s Nick Arama reported on the wild videos coming out of Florida in the last 24 hours, and they are intense. We’ve also reported on the ridiculous attempts by the Left to politicize the hurricane; here’s just one story from Sister Toldjah, but to see all our coverage, click here.

This storm has not finished unleashing its devastation; we will continue to update the situation as it develops. But for now, just take a moment to think about how brave–and slightly crazy–these storm-chasers are.