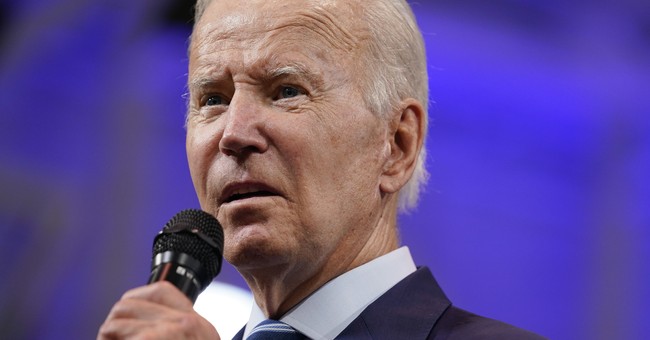 Having a president in the White House with who you disagree politically is one thing. Having one in the highest office in the land who is prone to random bouts of forgetfulness in public is something else entirely – regardless of what side of the aisle they’re on, and is something that should genuinely alarm people in both major political parties considering the massive amount of power that rests in that leader’s hands.

But after four years of relentless media/Democrat “remote diagnosing” and questioning of then-President Donald Trump’s mental health and fitness to lead, raising similar questions about the current Oval Office occupant became verboten in media circles except in rare instances where a reporter was brave enough to shine the spotlight on President Biden’s tendency to devolve into incoherency and seem lost and out of it at times.

We saw another “forgetfulness” scenario play out at the White House earlier during a conference on hunger and nutrition, where Biden called out for former Rep. Jackie Walorski (R-Ind.), searching the room for her in an effort to honor her work as the co-chair of the House Hunger Caucus, but apparently forgetting that Walorski and two aides tragically were killed in an Indiana car accident in August.

During the White House press briefing that took place a few hours after Biden’s flub, press secretary Karine Jean-Pierre was asked several times about what happened. Instead of answering the questions straightforwardly, Jean-Pierre insulted our intelligence by dodging them, instead claiming that Walorski was “on top of mind” and that Biden was looking forward to meeting Walorski’s family during a bill signing in her honor that will take place Friday (transcribed from the video):

KJP: “The President was naming the Congressional champions on this issue and was acknowledging her incredible work. He had already planned to welcome the Congresswoman’s family to the White House on Friday. There will be a bill signing in her honor this coming Friday, so, of course, she was on his mind. She was [on] top of mind for the President. He very much looks forward to discussing her remarkable legacy of public service with them when he sees her family this coming Friday.”

KJP: “I totally understand. I just explained she was on top of mind. You know, what we were able to witness today and what the President was able to lift up at this conference, at this event was how her focus on wanting to deal with, combat food insecurity in America. And this is something he was lifting up and honoring.”

CNN even got in on the action, asking Jean-Pierre about what Biden had said. She continued to ignore the elephant in the room, and responded by saying, “I don’t think it’s all that unusual to have someone top of mind, especially as there’s a big event.”

Surprisingly, NPR, where the number of Democrat apologists on staff are the rule and not the exception, noted that Jean-Pierre pretended like Biden had not “misspoken”:

At an afternoon briefing, White House press secretary Karine Jean-Pierre did not acknowledge that Biden had misspoken. Jean-Pierre told reporters, many of whom pressed her to elaborate, that Walorski had been top of mind for Biden as he named the the hunger conference’s congressional champions. And the president, she said, will be honoring Walorski on Friday with a signing of bill to rename a VA clinic in Indiana after her. “That is what he was thinking of. He was thinking about her,” Jean-Pierre said.

Not answering questions of this nature as honestly as you can only makes the situation worse and fuels the already-rampant speculation out there about Biden’s state of mind. I realize KJP is getting paid to make excuses for Joe, but the fact that she didn’t even try to come up with some semi-rational excuse (he’s tired, long day, etc.) for why Biden forgot that the Congresswoman whose passing he acknowledged in a statement was in fact no longer with us speaks volumes.

When not even your staunchest media allies in the press are cutting you any slack anymore on sensitive issues like this, and your own handlers can’t even give a cogent explanation for why something troubling happened the way it did, you know you’ve lost control of the narrative, and that’s where the Biden White House is today.