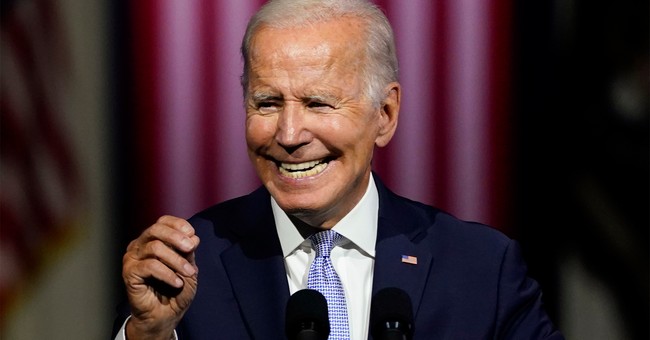 I think Joe Biden is starting to forget what script he’s reading from now.

Previously, Biden blamed Vladimir Putin’s invasion of Ukraine for the rise in gas prices, even though the prices had been going up since he came into office. He also tried to blame gas companies for price gouging. But then, when the prices went down a little (albeit, still far higher than they were when he came in), he tried to take credit for it.

But it’s funny that now he seemed to get lost on Monday and fell back into the “blame the gas companies” mantra.

“And — but, look, my message is simple,” Biden said. “To the companies running gas stations and setting those prices at the pump: Bring down the prices you’re charging at the pump to reflect the cost you pay for the product. Do it now. Do it now. Not a month from now — do it now. And it’s going to save people a lot of money.”

Whoops, prices must be going back up again. Does Biden think he’s going to convince us this is somehow the fault of the poor guy who runs the gas station? Those guys barely make anything on the gas, pennies per gallon at best. But again, anything to deflect from Biden’s own failed policies.

He thinks that he can flip on a dime: if one week it goes up, it’s the greedy companies and he has no control over it; if the next week it goes down, it’s because of his brilliant work. Who does he think would fall for this illogical claptrap? But it’s the ranting of someone bent on lying his head off to you. And that creepy way of saying “do it now,” with those eyes like saucers again. What’s up with that?We used to understand it was wrong for the government to try to dictate to and control private companies. But Biden has long since gone over the radical slide on that point; he doesn’t seem to care he’s just a little bit fascist.

But he didn’t leave the confusion there. I’m not even sure of what he’s saying here, half the time. I’m not sure he is; he just starts reading and then goes off into the abyss. It should concern the liberal media that he makes no sense, but it doesn’t.

I do get that he’s saying he’s asking banks to reduce fees for bounced checks and overdraft fees. Exactly why is the government getting involved in forcing the banks to waive fees? Now, much as I would like a variety of fees to be waived, I understand basic human nature that if you waive fees for bad behavior like bounced checks and overdrafts, you are going to get more of that behavior. But what business is that of the government, anyway? Unless, again, they are trying to dictate behavior, both to banks and customers.

More importantly, what does any of this have to do with inflation and resolving Biden’s bad policies that have contributed to inflation? It’s like a ridiculous flag-waving exercise, to deflect from the fact that on average, he’s swiped $4,200 from the average American’s annual income, between inflation and higher interest rates. How does any of this move the needle on that? It’s not even clear that the companies are going to do any of this either — he’s just saying he’s urging this.

This is Biden — and it’s getting worse.