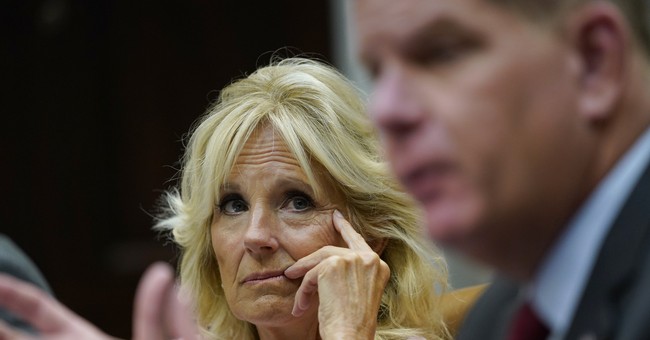 I don’t generally talk about Jill Biden’s clothes, but she wore something during some recent photos with her husband and world leaders that had a lot of people talking. Frankly, I think it says something about her psyche and why we are in the mess we are in with her husband. This may be the worst outfit yet, although there’s a lot of competition.

People had thoughts. Some compared it to a Hefty bag, some to something Alice Cooper might wear. My SO thinks that she must have been trying to imitate Cat Woman and the leather outfit, because that was what was considered “hot” when Jill Biden was young. Whatever was going on in her mind, it was completely inappropriate, probably for anyone — let alone a 71-year-old woman — because it was skin tight and showed every lump and curve. It looked even worse closer up.

Some thought it made Jill look trashy, and they didn’t just mean the Hefty bag. She needs some help when it comes to the dressing department. She vacillates between the odd floral outfits that look like old couches, but at least with them, she isn’t trying to look like she’s 25 years old. Not a good look-when you’re 71 and trying to pull off baby doll dresses or a fishnet stocking/short skirt look.

Jill Biden even got in trouble with what she wore to Queen Elizabeth’s funeral (to which she and her husband were late and were seated 14-rows back). Etiquette says it’s more appropriate to wear a hat and a longer skirt, as befits the somber occasion, rather than a fascinator on her head that looked like a party bow. Maybe that’s the “Bow Day Gah”?

I do think it’s an issue when she seems to want to dress like this, thinking that’s appropriate. As we see with the funeral, it can cause issues on the world stage.

But it also goes along with the explanation her husband gave for her wanting to get an Ed.D. — that she felt that she wasn’t getting the recognition because she was just “Mrs.” when he was a Senator. So, she went back and got the degree so she could get the credit. She has issues and wants acknowledgment. I think that may be one of the reasons that we’re in this problem with Biden in the office now. I think she wanted the position such as it is; now, she’s willing to play the handler, even with Joe having all the issues that he has, as she plays Edith Wilson redux.

Here she is having a meeting on how to “strengthen the teaching profession.” He accidentally comes in and says that whatever she says, he agrees with.

You would think she’d rather protect his reputation (such as it was), and allow him to retire with dignity. But now, no one will ever be able to get out of their heads how incompetent and incoherent he has been in the position. I don’t know what the conversation was like, but he was already having issues back when he was running-so someone should have had the decency to just say no.