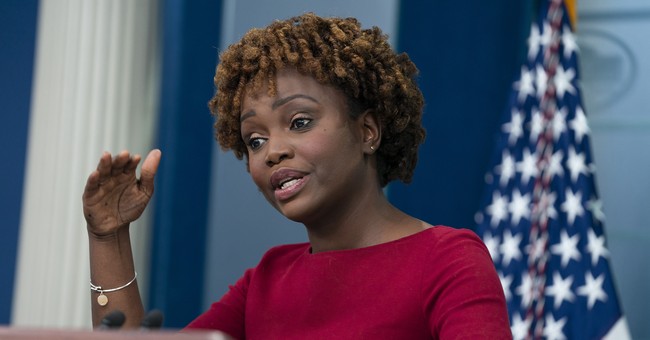 White House Press Secretary Karine Jean-Pierre went on MSNBC to sell some more malarkey about the border crisis and to answer questions about how they are dealing with it all. As we previously noted, she claimed that the Republican governors were putting the lives of illegal aliens at risk by sending them to Democrat-run cities. She also admitted that they weren’t coordinating with the Republican governors because of politics, a vile admission that they were treating states differently because of their political bias.

In the process, KJP was asked about the proposed new DHS “plan” that they are considering.

What was the new plan? Shutting down the border? Putting up some real security? Committing publicly to finishing President Trump’s wall?

Of course not. Because all of those choices might make sense. Given it’s the Biden team, you know that the “plan” is guaranteed to be a disaster, in keeping with how he’s been wrong about everything for the past four decades. But it’s a pip, even by their standards.

Listen as the reporter outlines what is being considered by Biden’s DHS: The plan involves flying people up to the border with Canada to relieve the strain on the border facilities. Then they’re going to fly them to cities around the country. So the reporter asked Jean-Pierre to tell her “how that is meaningfully different from what DeSantis and Abbott are doing.”

Naturally, Jean-Pierre didn’t answer the question. Because she can’t answer how it would be different. Then, she said something that just defies all belief: She claimed that they were dealing with a “migration situation…which is very new.” This is just a bizarre lie. She acts as though we haven’t seen what’s been going on for the past 18 months. As the RNC observes, “Biden’s border crisis has been raging with encounters above 150,000 for 18 months and illegal immigrants from over 160 countries.” While there are more right now from Venezuela, that doesn’t change that the situation has been out of control ever since Biden upended a lot of the things that President Donald Trump had in place before Biden took office.

The only new thing is that now the governors of Arizona, Texas, and Florida have put a spotlight on the problem by sending the people to Democrat-run cities. Suddenly, that means that Democrats care. But Joe Biden has already been sending illegal aliens to the interior of the country, such as to New York, under the cover of night. Why doesn’t the media ask them to justify that?

But how do they expect to solve the problem by flying people up to the northern border when they haven’t solved it by shipping people all over? The problem of course is that they aren’t doing anything to shut the door. You can keep ushering everyone who comes into the house into different rooms as each room gets filled up. But until you close the door, the house will just get more and more crowded, ultimately overwhelming the home. At best, it provides temporary relief for the border area.

But KJP couldn’t give the MSNBC reporter a straight answer about the stop gap measure plan because they can’t even be straight about what they intend to do.