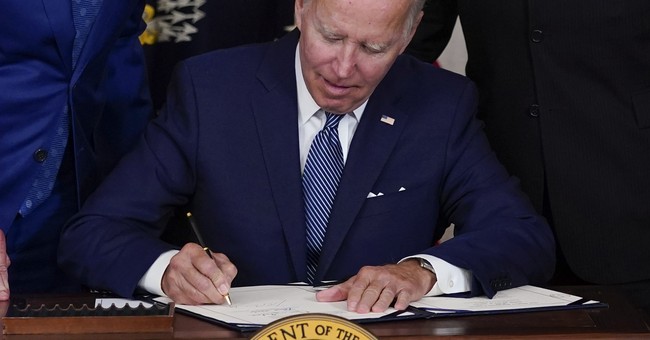 As was the case with his then-boss Barack “I’ve got a pen and I’ve got a phone” Obama, Joe Biden rules America primarily by executive decree, be they illegal, unconstitutional, or both. As the Healer in Chief nears the 100 mark in executive orders, it’s estimated that he’s already cost U.S. taxpayers nearly $1.5 trillion. Less than halfway through his disastrous first term, he’s already eclipsed Obama’s entire first year.

As reported by Fox News, Biden sits at 99 executive orders since taking office. His frenzied pace of E.O.s came primarily in his first year when he issued more than any president since the 1970s. Memos show at least one outside left-wing group financed by millions from liberal billionaire George Soros influenced some of Biden’s orders and regulatory directives — all while the national debt nears $31 trillion.

Simply put, Biden’s penchant for spending your money raises the notion that “Democrats spend like drunken sailors” to a whole new level of irresponsibility — every dollar of it with an eye on the ballot box.

As Fox noted, a so-called budgetary impact analysis accompanies each executive order but does not include actual monetary costs. Instead, they contain vague language, including if an order will have no impact, increase, or decrease federal costs. Anyone with a modicum of understanding of Democrat “promises” of the cost of their spending monstrosities or even more ridiculous, projected savings to taxpayers knows Democrat budgetary impact analyses are largely crocks of crap.

Not a tough one to figure out. Biden is a dyed-in-the-wool Democrat who’s lived in the pretend world of D.C. politics for nearly 50 years, has no concept of life in the real world, has never seen a wealth redistribution scam he didn’t wholeheartedly embrace, and has become a multimillionaire in the process. It doesn’t take a proverbial rocket scientist to figure out that disastrous combination.

Dickerson believes the president’s multitude of executive actions could also have a negative impact on inflation, as reputable bipartisan studies concluded about Biden’s laughably-named “Inflation Reduction Act,” as well.

It would be significant because all of this new spending that the executive branch is doing, that Biden is doing by fiat. That means more money getting pumped out into the economy that’s being financed by the Federal Reserve, which means the printing presses are on, which means that it adds to the inflationary pressures. The executive actions that Biden is doing are incredibly harmful to inflation because they are specifically aimed at reducing the supply of labor and goods and services.

Several of Biden’s executive orders have expanded “the welfare state” and paid “people to stay out of the workforce,” Dickerson said, adding: “So that’s only exacerbating the 3.3 million worker shortage that we see in the economy.”

With more than $201 billion in costs, the Biden era to-date far outpaces its predecessors, with more than three times the costs of Obama’s first year and nearly 40 times those of Trump’s. The Biden total, however, only overtook Obama’s due to a massive Environmental Protection Agency (EPA) emission rule to put it over the edge in the final month.

Yet, the drunken sailor spends on, totally clueless — or heartless as hell — about the damage and hardships he purposely creates for tens of millions of hardworking Americans.

But, hey — there are elections to be won. Right, Joe?