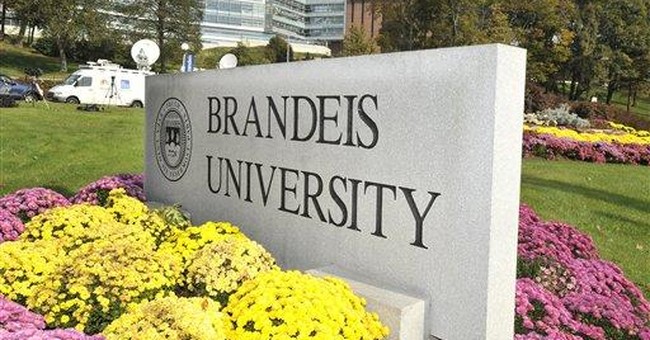 The hypocrisy of Critical Race Theory is baldly obvious, but nowhere more so than when it comes from white proponents – who, by the way, seem to make up the majority of CRT supporters. It seems that white people are the ones making the bulk of accusations about systemic racism even as they occupy all the positions of power in “the system” but here we are.

A social media post from Brandeis University assistant Dean Kate Slater brought this hypocrisy into full clarity this week. Slater took to the internet to blast white people for their inherent and unavoidable racism. She even went so far as to say she despises her own “whiteness.” Although she’s since locked her account to avoid further scrutiny, The New York Post captured and reported on the most egregious parts of her screed. I feel compelled to break down the snippets. CRT worshippers bang on repeatedly about the need to hold the racism of whiteness to account, but are rarely asked to be held accountable for their own remarks. If you’re all in on CRT, then go all in. Take it to its logical conclusion.

“Yes, all white people are racist in that all white people have been conditioned in a society where one’s racial identity determines life experiences/outcomes and whiteness is the norm and default.”

It certainly isn’t outside the boundaries of logic to suppose that the majority population would come to define norms and even default to those norms. I do find that a difficult aspect of navigating life as a Black American. Difficult but not soul crushing. It certainly hasn’t stopped me from achieving and I don’t believe it has the power to stop anyone from achieving. Not in a nation that is the very definition of opportunity. As I always say, America doesn’t owe anyone opportunities and we need to stop framing it that way. America itself is the opportunity. We are already five steps ahead of everyone else on earth just by virtue of residing here. What we choose to make of that opportunity is for each of us to decide.

However, this seems playing fast and loose with the definition of racism. If racism is simply defined by the color of the people in power positions, that does not bode well for HBCUs or the NAACP or any aspect of life in which Black people find themselves the majority. It is also pretty bold to thrust onto millions of people the notion that they are evil (and we know racism is the ultimate evil because we’re told that every day) simply for existing in the current iteration of American life. The idea that being white is an automatic predictor of success or positive incomes is ignorant at best, downright bigoted at worst.

Ok, fine. Who are the perpetrators of said oppression?

Oh. I guess it’s helpful to be able to identify the criminals in one of the supposedly most criminal scandals in American life – whiteness. It was very kind of her to point herself out as a racist. I’m left wondering what exactly I’m supposed to do now that Slater has admitted that she’s a racist and yet still holds one of the most prestigious positions in academia. Do I applaud? For what? By her own admission there’s still a racist in that position. Is this supposed to excite me for the coming era of racial justice? It feels sort of threatening, actually. It’s one thing to have someone in such a powerful job going about their business, not really understanding that they’re racist. It’s quite another to have someone admit they are a racist, admit they are evil, and then retain their position of influence regardless. That feels like a slap in the face. As a Black woman I certainly wouldn’t be inclined to trust the education of my children to such a person.

“Debates about critical race theory are often straw men for debates about whether systemic racism is real.”

Let’s just imagine Slater is right here. Just for shits and giggles. Let’s just pretend that people like me who oppose CRT are really just whining about the prevalence of systemic racism theology and we’re not genuine in our opposition. Let’s just pretend that CRT doesn’t promote racial supremacy and that it’s just an inconvenient reality for selfish, racist conservatives.

If Slater is right and the rest of us wrong and CRT is the response to systemic racism, why is she still talking?

Why is this woman still employed? Is she the problem or the solution?

The only logical outcome here is for her step aside and offer her job and pension to a non-white candidate. The only rational path here is to eliminate white people from leadership of any kind. Every progressive reporter is drooling all over themselves to praise people like Slater for their open-mindedness but not one ever thinks to ask what exactly people like the Brandeis assistant Dean are doing about it?

Blaming “whiteness” is big business. It seems Slater is doing nothing but perpetuating her own guilt. She has nothing to lose by degrading her race (which she did not choose and cannot unchoose). It has cost her nothing while she complains about what systemic racism has cost Black America. She still has her job, her benefits, her power, her prestige and now she has a few pats on the back. She’s given nothing up.

If these people want to jam CRT down our throats in the name of justice, then make them play their game all the way to the last second. The only fair thing to do is to give up their power and walk away and shut up forever.

Otherwise it’s just a load of horse dookey and Slater doesn’t get a pass on her evil “whiteness” just for telling people she’s ashamed of being white.