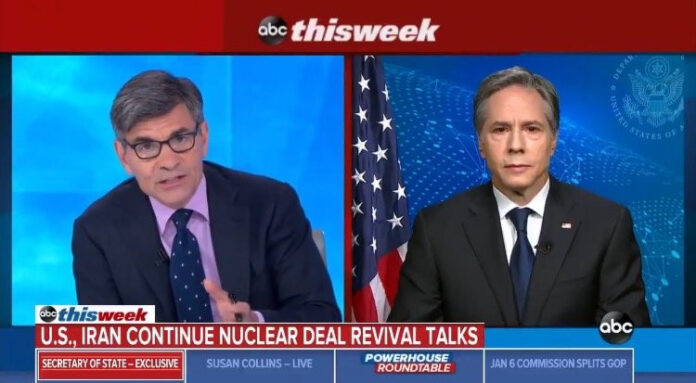 Secretary of State Antony Blinken says that Joe Biden is working tirelessly to lift sanctions against Iran. Of course, this is the part where we ask why. After all, Iran is one of the biggest bullies that the world has to offer. How anyone could expect anything good to come out of this is beyond our comprehension.

President Trump had the foresight to know this. That’s why he withdrew from the nuke deal that Obama had subjected the country to. That’s not all that Trump did, either. He also imposed the proper sanctions on the Iranians and killed off their top General, Qasem Soleimani.

Now that Obama is getting his third term (the joke should not be lost on anyone), we are back to the same old same. It’s time to compromise all of America’s needs, so that we can bend over backward for the rest of the world. Blinken spoke with ABC’s George Stephanopoulos over the weekend and the interview is an absolute must-see.

We are not saying that you are going to be happy with it, though. It’s classic enabling going on here and Biden is at the head of the table. Hamas terrorists are being funded by this administration right now but no one wants to say it out loud. That’s okay because we are more than willing to.

This is what happens when you have a president who is more committed to making sure that we remain a doormat. We all remember the infamous Obama apology tour, where he went around and told all of the other countries in the world just how bad America has been!

Biden’s a puppet president who is only sitting in the seat because some people have positive nostalgia for that train wreck of a presidency. We are going to be very honest here. At this stage of the presidency, we are ready to start calling it the Barack administration again.

Shoot, if you told us that Barack had direct involvement in the negotiations, we would not even bat an eye. There are lots of decisions that are made by Sleepy Joe that have the classic Barack fingerprints all over them. Obama and Biden are sure to get a cut of the proceeds, no matter what happens.

If you have ever seen the timeless classic gangster film King of New York, you know their mentality already. There’s a famous scene in the movie where Frank White, the titular gangster, is listing off all of his demands. By the end of it, he’s letting the room know that if even a $5 bag of dope is sold in the park, he wants a piece of it.

This is Biden and Obama, to a T. They want to make sure that they appear to be progressive, while making all sorts of flawed deals with our adversaries that line their pockets at the expense of American safety. This is their primary objective and conservatives like us were trying to get that point across ages ago.

As for the rest of the term, we anxiously await what comes next. We have barely even gotten started here and things are getting ridiculous. Biden is someone who loves to flip flop back and forth, so this may not be as bad as it seems. He likes to make people think that they will get what they want from him before he reneges. Only this time, our nation’s safety and long term security are at stake.

It’s not like Biden cares, though. He will run it up the flagpole and as long as Barack is cool with it, he will be as well. Biden likes to pretend that he is a man of great conviction but let’s face it. We have already seen what that is like under the Trump administration. Not to beat a dead horse, but Joe Biden is certainly about the furthest thing possible from Donald Trump.