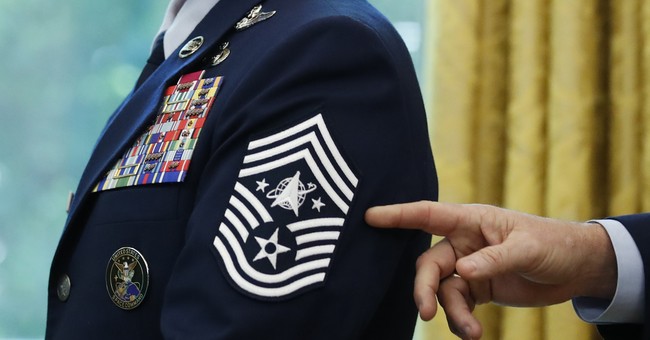 Another Republican lawmaker has joined his colleagues in speaking out on behalf of Lt. Col. Matthew Lohmeier, the Space Force commander removed from his position after criticizing the dissemination of critical race theory and other forms of Marxist thought in the military. Rep. Jody Hice (R-GA) sent a letter on Monday to Secretary of Defense Lloyd Austin demanding answers about Lohmeier’s firing, according to the Daily Caller.

Lohmeier’s story garnered attention from conservatives when Military.com reported that he had been removed from his position in the Space Force for remarks he made when promoting his book on a podcast. (See: Military Officer Fired Over Criticism of Marxist Ideology Creeping Into Armed Forces)

I write today to express my concern with a recent decision to relieve Lt. Col. Matthew Lohmeier of command, apparently for expressing concern with mandated diversity, equity and inclusion training in the U.S. Armed Forces which promotes Critical Race Theory. The decision to relieve him of his command and announcement that he is under investigation appears to be a politically motivated attempt to silence servicemembers’ disagreement with Critical Race Theory and its impact on unit cohesion and military readiness.

The lawmaker continued, criticizing critical race theory and explaining his efforts to remove the teaching from federal agencies. He wrote:

Recently, I introduced legislation, the Contents of Our Character Act, to prohibit employee training programs that promote race or sex stereotyping or scapegoating within Federal agencies. The proliferation of Critical Race Theory, a radical theory rooted in Marxism which divides and then treats people differently based on their skin color, necessitated this legislation. The actions taken against Lt. Col. Lohmeier further illustrate the need for such a measure. On May 14, 2021, Lt. Col. Matthew Lohmeier was relieved of his command of the 11th Space Warning Squadron at Buckley Air Force Base in Colorado.

The lawmaker also noted that Lohmeier never criticized or advocated for any political candidate or party when discussing his book during his podcast appearances.

“I am concerned that the military has characterized this servicemember’s public comments as potentially violating laws prohibiting partisan political activities in the course of his official duties. And particularly in this case, the servicemember did not advocate for or criticize any candidate for partisan political office or political party during his comments in a recent podcast interview.

“In fact, after reviewing his comments, it is not clear why Lt. Col. Lohmeier was relieved of his command or is being investigated at all.”

Hice ended the letter by demanding a staff-level briefing by no later than June 1 and requested a series of documents including:

“All documents and communications identifying the exact remarks made by Lt. Col. Lohmeier which led to the dismissal from his position as commander of the 11th Space Warning Squadron;

All documents and communications identifying the exact remarks made by Lt. Col. Lohmeier which would justify initiating an investigation into whether he engaged in prohibited partisan political activity, as well as the provision(s) of law or policy he is alleged to have potentially violated;

All documents and communications indicating the exact provision(s) of the Uniformed Code of Military Justice, Air Force regulations, or other laws or policies which Lt. Col. Lohmeier is accused of having violated by expressing his opinion in opposition to Critical Race Theory;

All documents and communications indicating whether the Department of Defense permits servicemembers to hold and express personal opinions in opposition to the use of Critical Race Theory.”

Hice is not the only Republican leader denouncing Lohmeier’s firing. Last week, a group of House Republicans sent a letter to the Pentagon pushing them to reinstate the soldier. Rep. Mike Rogers (R-AL), the top Republican in the House Armed Services Committee, recently declared he would be pushing back against attempts to enforce wokeism in the military.

“I am greatly concerned by numerous press reports of conservative voices being silenced in the Department of Defense while Departmental leadership defends and protects left-leaning voices,” Rogers said. “The United States Armed Forces should be focused on preparing to face and win any battles against the threats posed by China and other foreign adversaries and not imposing political beliefs on those who chose to serve in uniform.” (See: GOP Lawmaker to Tackle Military Political Bias Against Conservatives)