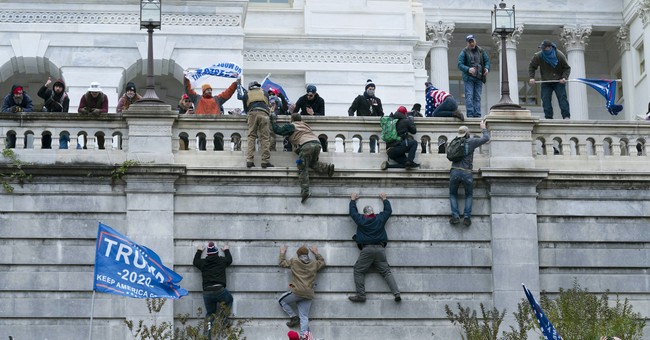 But when a group of people has become so broken-minded that they think the Capitol riot on January 6, 2021, is comparable to September 11, 2001, then we as a society have officially reached the point where 9/11 has lost its meaning as a historical event, much in the same way McCarthyism, the Holocaust, and other over-referenced historical events have.

The “1/6 is just as bad/worse than 9/11” takes aren’t new, but this Twitter entry probably takes the cake on just how overblown the Capitol riot has become.

The follow-up tweet, we previously covered here makes it clear what this person is saying (though S.V. Date is not the only one saying it):

Byron York’s thread, that this Huffington Post reporter is responding to, is spot on. There is no comparison whatsoever to 9/11, and it is an absolute slap in the face to anyone who lived through or lost loved ones during the 9/11 attacks. The same people who think that the Capitol riot was some sort of major attempt at a revolution 1) don’t understand how the system works, 2) think Handmaid’s Tale is something that can actually happen in America, and 3) have forgotten exactly what the 9/11 terror attack was about.

On September 11, 2001, a group of terrorists hijacked four planes in an attempt to attack the heart of the American government economy and cast an incredible amount of fear into the hearts of American citizens. Three of the planes hit their targets — the World Trade Center towers in New York City and the Pentagon in Washington D.C. A fourth plane was retaken from the terrorists by passengers aboard the plane, but it crashed in a field in Pennsylvania and is believed to have been aimed at the White House or U.S. Capitol.

In the aftermath, Americans were afraid to gather in large events, worried over where the next attack would be. Symbols of American economy and strength were decimated. We mourned, but we came together from all walks of life to stand tall. The spirit of America was best exemplified by the speech WWE Chairman Vince McMahon gave two days after the attack at a WWE event.

We were not defeated by the terrorists, who launched the worst attack on American soil in history. We continued on and lived our lives.

Most importantly, though, our eyes were opened to how poorly the system we had worked. Hundreds of eyes were on various moving parts of the terrorists’ plans, but no one communicated enough in the intelligence community to piece it all together. We have learned our lesson, and attacks on that scale have not happened in the 20 years since.

January 6, 2021, was a riot orchestrated by, frankly, a bunch of disgruntled live-action role-play enthusiasts (LARPers, if you will) who were interested in chaos, but had no real plan, no training to accomplish their goal, and were so unsuccessful in their quest that most of America have moved on simply because they realize, as Obama would put it, there’s no “There!” there. The riot was an infuriating event that showed just how cults of personality have taken over American politics and how easy it is to stir up mobs against a person or group of people who have slighted you.

Yes, they erected a makeshift gallows on the Capitol grounds. Yes, they had malicious intent. And, yes, they stormed the Capitol building and overwhelmed Capitol police. But the “system” was never in danger of being overthrown, as the Huffington Post reporter above seems to believe. The “heart of the American experiment” was not at risk. It was a bunch of stupid people doing really stupid and dangerous acts of random violence.

The “heart of the American experiment” was at such risk that, in the same evening, Congress gathered again and certified the 2020 election results, and Joe Biden was officially the winner of the election. The future refused to change.

Increasingly, we are allowing the politics of the moment to shape our perspective on the past, when it should be the opposite. How we view what is happening today should be put through the lens of past experience. Instead, we use this latest bad thing to warp and distort our interpretations of the events of the past. Just like everything is as bad as Nazi Germany, now things are becoming worse than 9/11 when they really weren’t. But that is how broken this political era has made those who are so hyperpartisan that they can’t fix their perspectives. They are stuck forever in the realm of “Orange Man Bad” and it is affecting their sense of history.

But, history is very clear. 9/11 was a devastating attack aimed at the heart of America and its government. The 1/6 riot was a riot that was never going to overthrow America and won’t lead to more attempts that may come closer. It should be obvious when you look at other attempts to force change in government by violent forces, but people who are so blinded by their hatred of Trump won’t see that. They only see a political talking point against their enemies, and they are letting it grow out of control.